Roll Over, Beethoven, and Happy 250th: Latest on Our Film and Book! 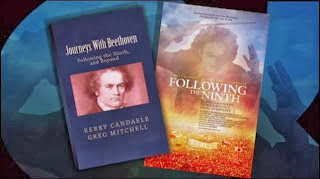 With Beethoven's 250th birthday this week, there is, naturally, renewed interest in the book that I co-wrote and the acclaimed film that it is based on that I co-produced.  Below you will find links to the book, to NPR and Bill Moyers coverage, and the film trailer.

The film, Following the Ninth, directed by Kerry Candaele,  follows the the Ninth Symphony and its enormous cultural and political influence around the world.  So we travel from Chile during the Pinochet years, to China's Tiananmen Square uprising,  to Japan (for the annual ultra-mass singing of the "Ode to Joy" at this time of year) and to Germany with Leonard Bernstein for the fall of the Wall, plus Billy Bragg re-writing the "Ode to Joy"--and playing it for the Queen.  The book, Journeys With Beethoven,  explores all of this, plus recounting my own Beethoven obsession from New York to Tanglewood, and a lively Q & A with the great pianist Jeremy Denk.

The film is streaming and  DVD for our film finally available via Amazon,  and just in time for the holidays!

And, of course, our companion updated book and ebook still a great choice, order via Amazon. It's just $3.99 for the e-book and $12.95 for print.Meanwhile, screenings have continued, most recently in....Beirut, Lebanon.

Reviews of film include very positive review from New York Times:  "Thrilling... all the film’s segments are smartly assembled and gracefully paced. Oh, and the score’s pretty good, too." From the Village Voice.   "A majestic sonic travelogue... that rarest of films: a documentary as ineffable and transformative in its reach as it sets out to be."Another good review at Film Journal: "Stirring documentary."  Hollywood Reporter: "Persuasive feel-good movie doc.... offers enough spirit-lifting moments to prove its thesis and leave viewers inspired!"

Obviously, its, not it's

I love this music, and your documentation of its cultural impact is amazing. An artist named Mark Nystrom used computer code to create visual art based on Beethoven's 9th. It is quite an experience to look at his art while listening to the music. His art is at http://marknystrom.com/Ode-to-Joy

Why am I crying SO hard after watching the clip ??

Guess I'll just have to go see the movie to find out ...

This film looks great. I let readers of my blog know about it, too, via this link: http://bit.ly/18UzBsu

OK, the roadways in Boston are now passable, something I couldn't have said, oh, I dunno, YESTERDAY. MapQuest will provide you with directions to get here by the shortest route.