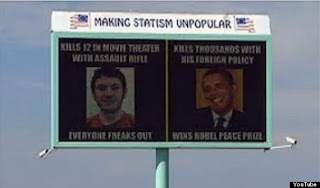 Here's an update on backlash growing in Idaho over an electronic billboard sponsored by a well-known local libertarian that sort of compares Barack Obama to Aurora mass killer James Holmes.  "The giant sign on Franklin Road and North 21st Avenue features a photo of Holmes with the words, 'Kills 12 in a movie theater with assault riffle, everyone freaks out,' written under his picture, juxtaposed to a photo of Obama with the words, 'Kills thousands with foreign policy, wins Nobel Peace Prize," written below."  One defender claims it is simply inspired by Obama breaking his promise to bring troops home from Afghanistan by now.
Posted by Greg Mitchell at 11:49:00 PM