The Parts Left Out of the Springsteen Memoir 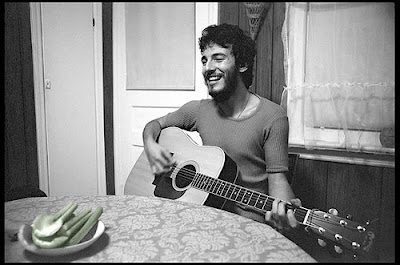 Mother Jones just published my piece on how Springsteen (and Bowie) helped bring down the Berlin Wall, derived from my new book, The Tunnels.  So allow me to reflect further:

Forty-four years ago today I got a phone call at my office at the legendary Crawdaddy, where I served as #2 editor for nearly the entire 1970s, that would change my life, for several years, anyway.  It was from a fast-talking dude named Mike Appel, inviting me to catch his top (and only) act in a press event/concert upstate,  the following day, December 7, 1972,  in notorious...Sing Sing Prison.  The act was a total unknown whose debut album had not yet been released, by the name of Bruce Springsteen.

With editor Peter Knobler,  I met  Bruce in the back of a van under the old West Side Highway--we were the only two from the entire NYC press corps who bothered to show up--and then drove up with Mike to the prison  (see my video below).  Then we attended his first NYC gig with the band, at Kenny's Castaways.  We were blown away and decided right then and there to create an unprecedented monster piece on this unknown act whose first album wasn't even out yet--though we quickly got a test pressing.

Then after two weeks of hanging out with Bruce and the band, and attending more club gigs (as one of the very few audience members),  I helped create the very first magazine piece about Brucie--and 8,000 words, at that--written by Peter for Crawdaddy.  We even put Bruce's  name on the cover.   Then, a year later,  I hailed his second album in a major review.  What was significant about all of this:  Most in the press were reacting to Bruce in a lukewarm (at best) fashion at that time and his record company was considering dropping him--until Crawdaddy doubled down with my rave of his second album, and then Jon Landau offered his crucial "I've seen the future of rock 'n roll" blurb.  Then we gave him his first magazine cover--two months before Time and Newsweek--also written by Peter.

Many other Crawdaddy pieces--and dozens of concert  dates, from Central Park to Santa Monica--would follow and Bruce would become a friend for a number of years.  Crawdaddy even challenged the E Streeters to a softball doubleheader--and swept them.  Bruce played 2B.  Miami Steve pitched and played CF (often with a drink in one hand).   Bruce even let me write a book at his house when he was away on his trip to England after Born to Run hit.  Bruce, the self-described fledgling driver, helped drive me to a gig in my hometown of Niagara Falls and back again.

For whatever reason, Bruce does not mention any of this in his excellent and honest new memoir.  (His only reference to Sing Sing is in a long list of odd places Appel had him play--and got the year wrong.)   His only reference to Crawdaddy, sadly, is one mention of...the magazine's founder Paul Williams who had nothing to do with our early coverage.   But the book did have a lot of ground to cover.  Still, a gold record for Born to Run given to me in appreciation hangs on my wall.  He did do me a real solid and write the preface to my book on Iraq and the media, So Wrong for So Long, in 2007.   And just this past June, his management gave me four free tickets for his concert in Berlin.

Bruce even figures in my new book on escape tunnels under the Berlin Wall (and JFK trying to kill CBS and NBC coverage of them).   He performed in East Berlin. to his largest crowd ever a year before the Wall fell.  It's an amazing story in all regards.

Here'  (below) is a little video about the day I met Bruce in December 1972--in Sing Sing--which also includes excerpts from his very early live performances, including the acoustic  "Growin' Up".   Photo above from December 1972, days after the Sing Sing gig, with me across the table (photo by Ed Gallucci).

I didn't know that Sprinsteen played Sing Sing. He sounds great! Is the footage from Sing Sing and Kenny's Castaways? Who filmed it?