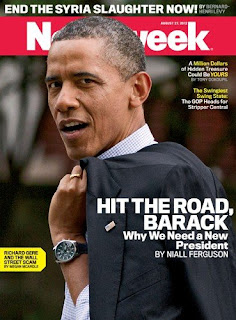 UPDATE #3  Niall Ferguson on friendly Bloomberg TV this morning (Tuuesday) to hit back at critics, who are merely "nit-picking" not really fact-checking.  Also says he's sure this will not impact his academic reputation.   My piece at The Nation collects new opinions from James Fallows, Andrew Sullivan and others.


UPDATE #2 : More fact-checking (it's a gold mine) of the Ferguson piece via The Atlantic and by John Cassidy at The New Yorker and from Alex Pareene at Salon (who exagerates only slightly in declaring "every fact wrong"). Pareene:  "Niall Ferguson is an intellectual fraud whose job, for years, has been to impress dumb rich Americans with his accent and flatter them with his writings...[W]hile there are tons of very legitimate and compelling arguments against the Obama presidency, Ferguson instead based his article on a bunch of crap he made up."  Plus, more from Josh Holland -- Ferguson can't even get his own history right, or lies about it.

UPDATE #1:  Ferguson has now replied to Krugman, provoking economist Brad Delong to say he should be fired by Newsweek--and reviewed by his peers at Harvard.  And Krugman sure to reply.
*

Paul Krugman in a blog post just up slams new "Hit the Road, Barack"  Newsweek cover story by right-wing Niall Ferguson for several severe and "unethical" factual errors.  Getting to just one for now, he points to a grossly misleading claim about the CBO saying Obamacare will be adding to the deficit when in fact it said no such thing.  Krugman says an official correction of this "cheap shot" by Newsweek is warranted.

Here's the Ferguson piece, via Daily Beast.  Just at a glance I can already see that he uses 2008 numbers (from the Bush years) against the president, to show what we have lost--going back to  BEFORE the economic collapse.  Also, he makes the despicable claim, which isn't even true, that half of Americans don't pay taxes.  He writes, "Welcome to Obama's America," when it's more accurate to say, "Welcome to the Bush-Romney America." Instead he finds only "some truth" in any blame for Obama's predecessor.  Plus he regrets that we left Iraq--and apparently wants us to stay in Afghanistan forever. Yet claims go be a deficit hawk.

And then the inevitable:  "I know, like, and admire Paul Ryan.  For me, the point about him is simple. He is one of only a handful of politicians in Washington who is truly sincere about addressing this country’s fiscal crisis." Unsaid, of course, is that Ryan supported every major budget-busting move of the past decade.   I love this: He writes of a dinner with Ryan in 2010,  "Ryan blew me away. I have wanted to see him in the White House ever since." Get a room, guys!  This is the Kristol-Palin affair, redux. Send him one of the shirtless Ryan shots in any event.

One more classic:  "But one thing is clear. Ryan psychs Obama out. This has been apparent ever since the White House went on the offensive against Ryan in the spring of last year. And the reason he psychs him out is that, unlike Obama, Ryan has a plan—as opposed to a narrative—for this country." Come on Niall, even school boys know it should be "psychs out Obama."
Posted by Greg Mitchell at 4:40:00 PM

Sounds like a typical "Blame Bush" argument. Bush is running. When does blaming end and leadership begin? Or do Democrats want to ignore that little fact?

Obama has had four years to implement policies to help improve the economy. None have worked.

Guess this is what journalism has come to. Factual or not, I'm sure the cover will do the job they wanted.