On Losing a Friend on 9/11--And the Losses Since

Fifteen years years ago, at this hour on this day (and very sunny, like today), I was  boarding a train to New York, heading for my office in the East Village, in New York, at Editor & Publisher magazine.  A few minutes later, as my train sped south, an airliner flew almost directly overhead over the Hudson on its way to find and smash into one of the World Trade Center towers.  Before the train reached Grand Central, a conductor announced that first one plane, then another, had hit the WTC.  I looked down the river and saw the smoke, recalling that one of my friends, who I had talked to the night before--about the Little League team we coached--worked on a very high floor in one of the towers.

I watched the next hour unfold at Grand Central, tried to catch the last train out of town, barely missed, then evacuated the terminal in full after they announced a plane might be heading our way.  Then I wandered downtown...

The rest of my story from that day (and the state of terror and war since) which I wrote for The Nation a few years ago. And my photo at Ground Zero one year after.
*** 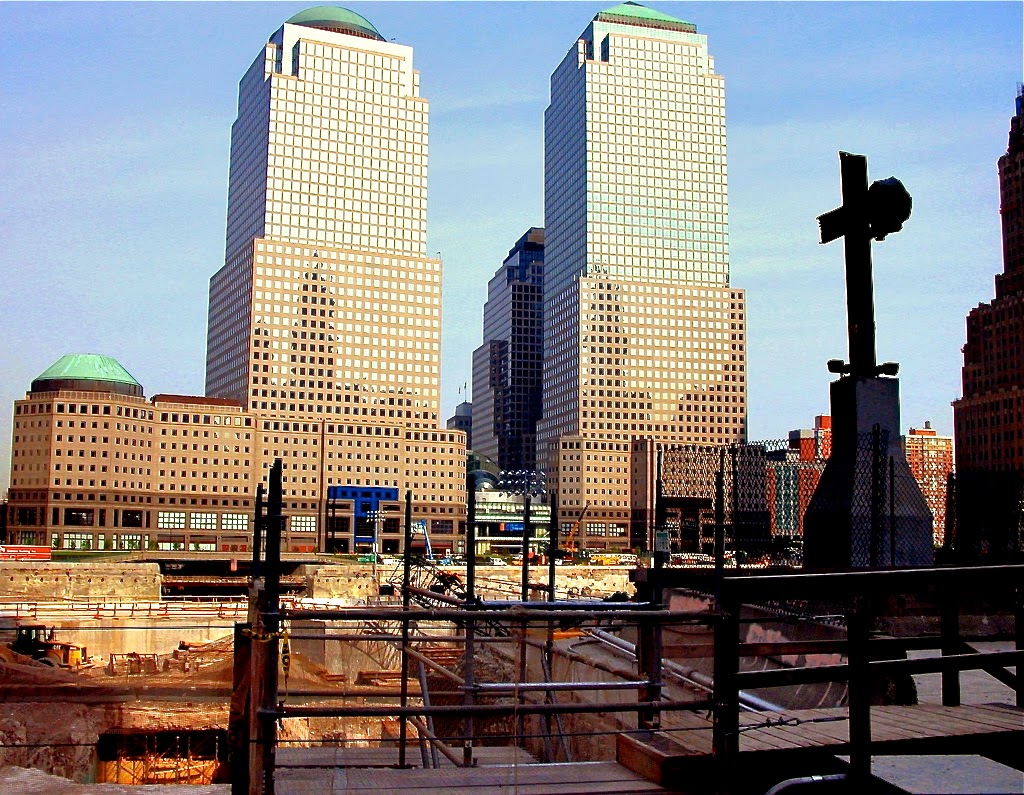 On that morning in September, I found myself stuck at Grand Central Terminal—just off a commuter train and transfixed in front of a TV tuned to Fox News within a large newsstand just off the main hall. The image on the screen: the Twin Towers on fire. By now it was certain that this was a deliberate, terrorist attack. but Grand Central had not yet been evacuated. The subways were still running—with the towers yet to fall—but I could not move from in front of the TV.

A good friend of mine worked on a top floor of one of the towers. I had just spoken to him the night before.

So it went for millions of New Yorkers that day. It’s always amazed me how so many people in the rest of America—and so many politicians—could invoke 9/11 to sell or accept war, torture, wiretapping and all the rest, yet most of the citizens in the region that experienced 9/11 and the human loss more than anywhere else, here in the New York area,  opposed  those measures, according to polls. Now families, around the country, mourn lives still being lost in Iraq and Afghanistan, while others decry the wasted resources and human spirit spent on wars..

Compared with the stories of some New Yorkers, my own 9/11 story pales, but it informs everything I write and feel about the tragedy.

That morning, I was midway to Grand Central Terminal on a train speeding along the Hudson when the conductor came on the public-address system and said, “A plane has just hit the World Trade Center.“ And, sure enough, looking straight down the river, there was one of the Twin Towers smoking. Then, a few minutes later, pulling into Grand Central, came another announcement: “You’re not going to believe this, folks, but a plane has just hit the other tower.”

My first thought was: “What floor does Jon Albert work on?” I recalled it as being horrendously high. I had just talked with my friend the previous night. He was on the board of the local Little League, I was a manager.  I had coached his son Stephen for several years, and wrote about Jon and his boy in my recent book, Joy in Mudville. In fact, I was coaching his son that month on my “fall ball” team, and his dad was one of my assistants.

Only much later, when I learned the flight paths of the two jetliners, did I realize that as I was hurtling south on the train along the river, at least one of the hijacked planes flew directly overhead. Nearing the city, I might have even heard it.

After ordered out of Grand Central, I spent the next three hours, in a sun-drenched daze,  trying to reach our office, more than thirty blocks south. I took a cab for a few blocks, then all traffic stopped. I walked back to Grand Central thinking the subways or trains might be running again. They weren’t. Like other New Yorkers, I staggered around town  for an hour. Catching bits of news off TV sets in bars and cafes, some of us learned that another hijacked airliner might be heading our way.

Then I trudged to the office. Rooms in every hotel were already taken. At one, three young people who had been catering an event ainone of the towers tried unsuccessfully to book a room. They were ghost-like, partly covered in ash.

As I got below 14th Street, I could see the mountain of deadly smoke covering that patch of blue sky to the south that once embraced the towers. I was a veteran of ground zeroes, having spent a lot of time in Hiroshima and Nagasaki, but this was here, this was now. Swirls of acrid dust blew in my face—pulverized concrete and (I imagined) human residue.

Well, I reached the office, somehow got some stories up on our website, and when the trains started running again, I headed for home in the evening. When I got there,

I found out that Jon Albert, who worked at Marsh-McLennan, had not yet returned, and everyone feared the worst. Also missing was the daughter of our neighbors directly across the street.  (We had just given the neighbors our son's old backyard swing/slide set for the use of their daughter's kids when they visited.)

None of us could reach our office the next day, as everything south of 14th Street was sealed off, but many of us dodged the police lines a day later to help get the issue out, on time: a small miracle. To do it, we had to ignore the disturbing smells from outside that often filtered through our ventilation system. Our first cover at Editor & Publisher was all black with “September 11, 2001” in white type. My friend Jon Albert still hadn’t come home.

Two weeks later, I took my son, along with Jon’s two boys, to a Mets game. Then I arranged for the Mets to let them come down on the field and talk with manager Bobby Valentine in the dugout and meet some of the players. They were all kind.  The boys still thought Dad was coming home. He never did, and the paperback edition of Joy in Mudville is now dedicated to him. So is the local Little League field. So is this article, and everything else I write about war and terror.