The Final Front Page Before The Planes Hit Everything changed that day. Perhaps that's why millions of us still retain, filed away, the front page of our local paper for Sept. 12, 2001, carrying a banner headline that reads something like "America Under Attack" or "New Day of Infamy." But the true impact of what happened hit me harder than it had for quite some time while examining a routine, even dull, front page from the day of the terror attacks.
Holding that September 11, 2001, front page of The New York Times in my hands, it produced a shiver. There was the weather forecast in the upper right corner, accurately predicting the memorable day as "mainly sunny, high 79." Then it occurred to me that I would have read that very edition on the train to New York City that morning, speeding down the Hudson as one of the hijacked planes flew directly overhead, followed minutes later by a conductor announcing over the P.A. system, "You won't believe this folks, but a plane has hit one of the World Trade Center towers." I looked out the window and saw smoke far down the river. Then upon arrival at Grand Central, the conductor announced that the second tower had been struck.  One of my friends was on one of the highest floors.  He did not come home that night.
But what really set me thinking, years later, was this: The killings in America were confined to that day, but within hours of the terror attacks, events were set in motion that would lead to even more Americans perishing abroad in the unnecessary war in Iraq-- not to mention all the dead Iraqis and the wasting of a trillion dollars. As Richard Clarke revealed, before 9/11 was over the administration was already boasting that it would attack Saddam, even without any proof of a connection to that day's terror attacks.
Looking at that front page reminded me of what was lost: the relatively peaceful "normalcy" of our lives then, and the hope that major problems plaguing us here at home (such as health care) could be tackled and resolved.  Instead we got a seemingly endless "war on  terror."  And we are still in Afghanistan.
What was the lead upper-right headline that day in the Times? "Key Leaders Talk of Possible Deals to Revive Economy." Next to that: "Scientists Urge Bigger Supply of Stem Cells." Ho-hum, but a whole lot better than "Surge of U.S. Troops to Baghdad Not Producing Results." Other front-page headlines from Sept. 11, 2001, reflect an innocence now lost: "School Dress vs. a Sea of Bare Flesh" and "In a Nation of Early Risers, Morning TV is a Hot Market." (Note: In some editions, though not mine, there was a front-page story at bottom right on a 1971 hijacking.)

If we could only turn back the clock. More than just about anyone, many of those in the media--including at The New York Times--no doubt wish they could turn back the clock to the morning of Sept. 11, 2001, and do a lot of things differently in the months and years that followed.  (My photos of Ground Zero one year after.)

For update on my life today, my new blog here. 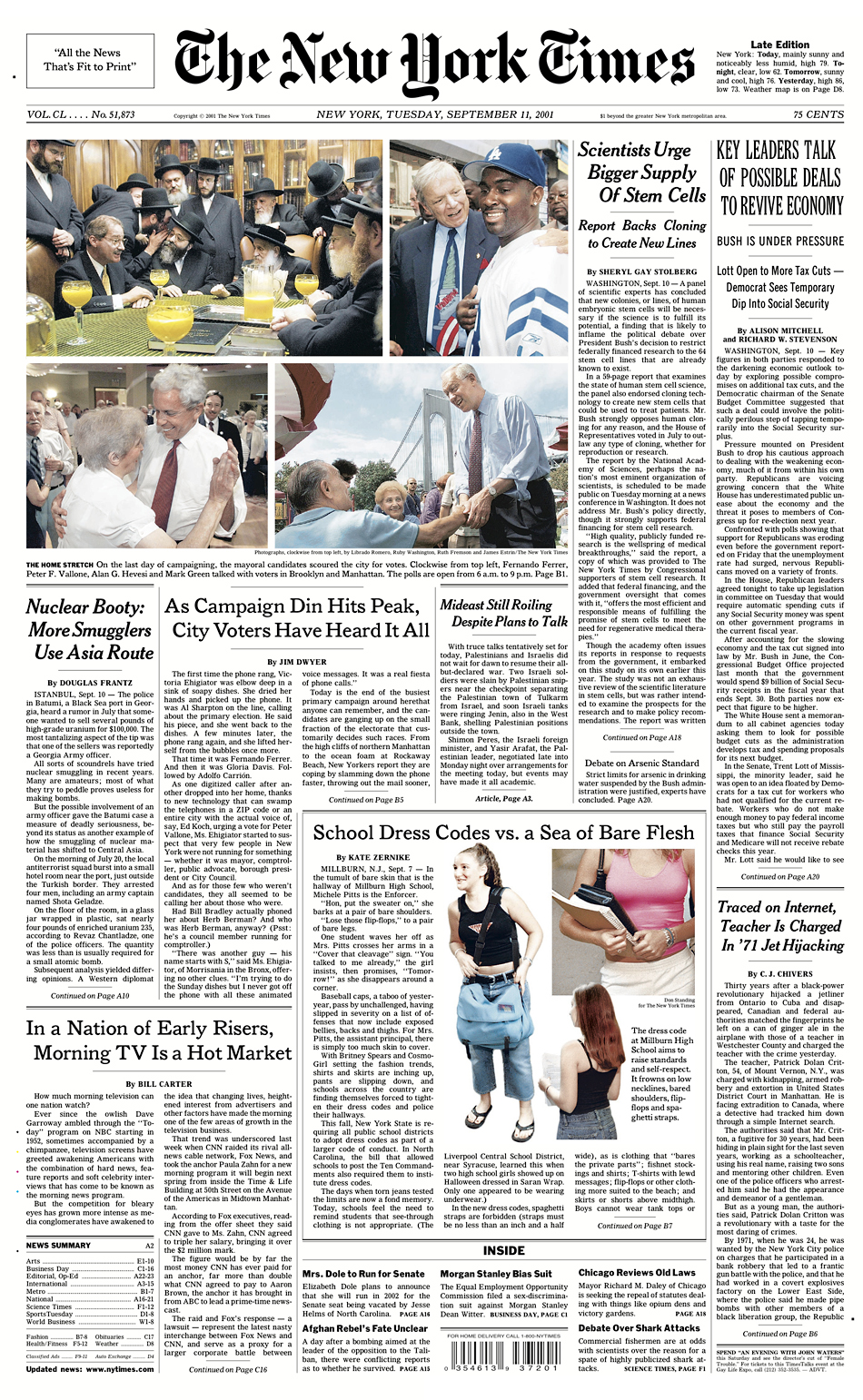