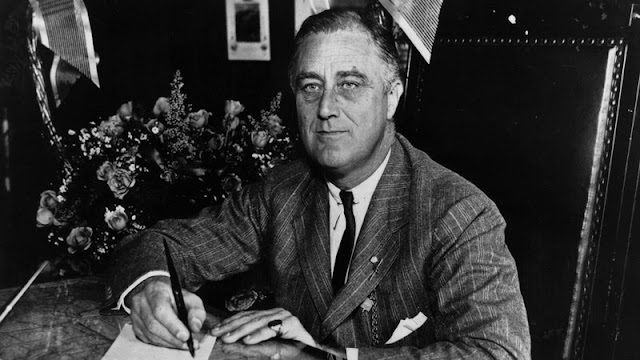 Near the close of the new David Fincher film, Mank, writer Herman Mankiewicz tries to console a MGM director that the bogus newsreels he made for Irving Thalberg were not the primary factors in destroying Upton Sinclair's race for governor of California in 1934.   Rather, it was President Franklin D. Roosevelt's failure to come out for Sinclair, the unlikely Democrat leading a popular leftwing mass movement.   That director, nevertheless, assumes the guilt and soon commits suicide.

It was a fictional conversation, but the movie Mankiewicz was not far wrong.  Sinclair had met with FDR two months before election day and an endorsement seemed certain.  They even chatted about Teddy Roosevelt's response to Upton's The Jungle 30 years back.  Then Roosevelt and his top aides got scared about embracing a former Socialist, and cut a deal with Sinclair's dullard GOP opponent.  The story--and much more--was told in full for the first time in my award-winning book, The Campaign of the Century.  (Learn more or order here.  And see my new New York Times article about Mank and Sinclair.)

Franklin's activist wife Eleanor had backed Sinclair in epic race--but FDR instructed aides to tell her to remain silent, and she did.  Sinclair wrote her a key private letter after meeting with the president, but she was away when it arrived, and the aides opened it and informed the FBI and J. Edgar Hoover, no less.

And the dirtiest, and one of the most influential, campaigns in USA history--it virtually created the modern campaign--emerged to defeat him.  Hollywood took its first all-out plunge into politics and the saintly Irving Thalberg created the very attack ads for the screen.  See a trailer below for my book on what led to all this:

Greg, just to let you know I've linked to you and embedded the movie at http://seattletosanfrancisco2015.blogspot.com.au/2015/06/for-special-treat-exit-via-san-gregorio.html

I thought it a nice point at which to wind up travel in California.

No mention of Roosevelt's betrayal as being part of Heinlein's political evolution to John Birch Society-flirting Libertarian.

That seems more due to reading book asserting Roosevelt essentially forced Japanese to attack Pearl HarborI, which made him hate FDR. Heinlein's first loyalty was to the Navy, his first calling, which he was ripped from forever due to his tuberculosis. Also, a strong case of nuclear jitters made him a fierce anti-communist. He dug a bomb shelter.

Hard not to think of Sinclair as the Bernie Sanders of his day.