'NYT' Puts in an Appearance at Manning Hearing 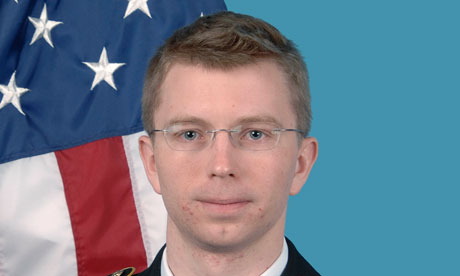 UPDATE #3 Sunday  Manning has easily won--with 70% of the vote against other finalists such as Nate Silver and Pussy Riot--a reader poll as Man of the Year at The Guardian, which seems a bit embarrassed by it.

UPDATE #2 Saturday night.   Now public editor Margaret Sullivan posts her Sunday column, which updates and expands her blog post (see below).   "As a matter of news judgment, giving so little coverage to the hearing is simply weird. This is a compelling story, and an important one....I hope that something significant is in the works. It might begin to make more sense of a decision that is otherwise hard to understand."

UPDATE Saturday  As if in response to the scolding below (and from many other sources), the Times finally sent someone to cover the Manning hearing--for a few hours and a week late.  It was one of its top writers Scott Shane, and he produced this story today, along with Charley Savage back in the office.  Kevin Gosztola, co-author of my book on the Manning case, dissects it here.

Earlier:  The Times' public editor,  Margaret Sullivan, who has been away for a bit, returns with a post that hits the paper for failing to send a reporter to the past week or so of hearings in the Bradley Manning case--where the Army private has finally testified after all of these years.   The paper's D.C. chief replies:  "We’ve covered him and will continue to do so. But as with any other legal case, we won’t cover every single proceeding. In this case, doing so would have involved multiple days of a reporter’s time, for a relatively straightforward story. The A.P. article recounting the main points of Mr. Manning’s testimony about his conditions of confinement that ran on page A3 of The Times conveyed fundamentally the same material as a staff story would have."

But Sullivan quotes a new New Republic piece and a Times reader both bashing the paper.  Sullivan concludes:


One doesn’t have to agree with either of those viewpoints or interpretations of events to see the news value of the Manning testimony at Fort Meade. The testimony is dramatic and the overarching issues are important.  The Times should be there.


Greg Mitchell is the author of more than a dozen books (see right rail of this blog).  His latest, on the Obama-Romney battle, is "Tricks, Lies, and Videotape."
Posted by Greg Mitchell at 8:00:00 AM