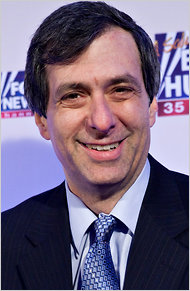 A subject I've been posting about for, oh, the past decade --the media's sad, tragic performance during the run-up to the U.S. attack on Iraq almost eleven years ago.  It's also the subject of my book So Wrong for So Long.  Howard Kurtz, now at Fox, calls it, aptly, the media's "biggest failure of modern times."

Just one aspect:  My book reviews the article Kurtz wrote for the Post in 2004, taking the newspaper to task for some of its misconduct (the paper itself did not assign is own probe).

Because of the notoriety surrounding Judith Miller and The New York Times’ coverage, the Post’s almost equally poor coveage and opinion pieces drew too little attention after WMD were not discovered. The Post ran Kurtz’s critical August 12, 2004, piece on the front page, something it inevitably failed to do with stories skeptical of the march to war.

By the Post’s own admission, in the months before the war, it ran more than 140 stories on its front page promoting the war, while contrary information “got lost,” as one Post staffer told Kurtz. So allow me to pursue a few points (see my book for much more on media misconduct in war coverage). First, two quotes (beyond the Woodward gem) from Post staffers that speak for themselves:

• “There was an attitude among editors: Look, we’re going to war, why do we even worry about all the contrary stuff?”—Pentagon correspondent Thomas Ricks.

• “We are inevitably the mouthpiece for whatever administration is in power.“—Reporter Karen DeYoung.

* “[Bob] Woodward, for his part, said it was risky for journalists to write anything that might look silly if weapons were ultimately found in Iraq.”

Next, consider the highly revealing excuses, offered by Post editors:

• Downie also asserted that “voices raising questions about the war were lonely ones.” This is simply rewriting history. On the eve of the invasion, polls showed that half the public wanted to delay the invasion to give the United Nations inspectors more time to do their duty, and millions had already marched in the streets. Many of the editorial pages of major US newspapers (though, crucially, not the Post’s) were expressing their own doubts about the need for war. Key intelligence experts questioned the administration’s evidence but were given little play, on or off the record, at the Post.

• Liz Spayd, assistant managing editor for news, offered another weak defense in explaining why a key article questioning the existence of WMD by thirty-two-year Post veteran Walter Pincus was finally published on Page A17. Pincus’s stories are “difficult to edit,” as she put it. Matthew Vita, then national security editor and now deputy assistant managing editor, offered another defense for the Pincus miscue: “We were dealing with an awful lot of stories, and that was one of the ones that slipped through the cracks.”

• That rationale also applied to another sad case. In the days before the war, Dana Priest and Karen DeYoung finished a piece that said CIA officials had communicated significant doubts to the administration about evidence linking Iraq to an attempted uranium purchase. The story was held until March 22, three days after the war began. “Editors blamed a flood of copy about the impending invasion,” Kurtz explained.

• Vita had a different excuse on another missed opportunity. One of the fresh revelations in the Kurtz piece was how, in October 2002, Thomas Ricks (who has covered national security issues for fifteen years) turned in a piece titled “Doubts,” indicating that Pentagon officials were worried that the risks of an invasion of Iraq were being underestimated. It was killed by Vita. He told Kurtz that a problem with the piece was that many of the quotes with names attached came from “retired guys.” But the Post (and much of the rest of the media) rarely shied away from “retired guys” who promoted the war.

• Other excuses rippled through the Kurtz piece, featuring phrases like “always easy in hindsight,” “editing difficulties,” “communication problems” and “there is limited space on Page 1.” One editor explained, “You couldn’t get beyond the veneer and hurdle of what this groupthink had already established,” even though the British press somehow managed to overcome that. Amid all the excuses, Post staffers denied that the paper was under any pressure from the White House.

• At the end of the Kurtz piece, Downie offered his ultimate defense. “People who were opposed to the war from the beginning and have been critical of the media’s coverage in the period before the war have this belief that somehow the media should have crusaded against the war,” Downie said. “They have the mistaken impression that somehow if the media’s coverage had been different, there wouldn’t have been a war.”

Two responses to that final excuse come quickly to mind.

Most of those against the war did not ask for a media “crusade” against invasion, merely that the press stick to the facts and provide a balanced assessment: in other words, that the Post do its minimum journalistic duty. If anything, the Post, and some other major news outlets, came closer to crusading for the war.

And did Downie honestly believe that nothing the media might have done could have possibly stopped the war? Especially when, as noted, public and editorial opinion on the eve of war was divided? Does he take issue with Walter Lippmann’s notion that the press plays a vital role in “manufacturing consent”? And does he really believe his must-read newspaper lacks any clout? If so, what does that say about the state of modern newspapering?

Greg Mitchell’s So Wrong for So Long, on the media and the Iraq war--with a preface by Bruce Springsteen--has been published in an expanded edition for the first time as an e-book.
Posted by Greg Mitchell at 7:45:00 AM

I really like your blog. My main criticism of your book title is the use of the word "failed". Who do you claim "failed"? The Iraq War, like nearly all others, was a resounding success for the military-industrial complex that dictates our nation's foreign policy. I'm not being coy here; Iraq was a huge win for Dick Cheney and so many other Bush officials who had economic interests in the defense industry. The outcome of Iraq was "heads I win, tails you lose" with regard to the likes of Halliburton and other corporate giant squids wrapping their tentacles around taxpayer dollars and sucking hard. The monsters who love war unequivocally TRIUMPHED in Iraq, and that is the primary consideration on the part of those who rule us.