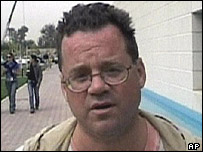 The dangers were there from the start--and the results have been well chronicled since.  But how did the media cover questions about its "embedded" coverage of the Iraq war near the start?  As you'll recall, reporters and camera folks were allowed for the first time to sign up and travel fully with our invading (and later occupying) forces.  This allowed valuable close hand reporting--although with various censorship restrictions.  It also produced coverage that was, shall we say, often influenced by identifying with the troops and the mission a bit too much.  Often we heard "we" are doing this or that as reporters sent along for the jeep and Humvee rides.

Here's the first NYT report from eleven years ago that started to look at the issues, with quotes from Michael Kelly of The Atlantic, left (who would die there) and critic Todd Giltin and others.   My new book covers this issue at length.
Posted by Greg Mitchell at 9:14:00 AM