75 Years Ago: Time to 'Get the Anti-Propagandists Out' 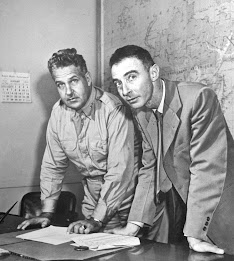 As I've noted in many previous posts--and in my new book The Beginning or the End--the U.S. after dropping the bombs over Hiroshima and Nagasaki was confronted with a worldwide publicity (not to mention,  moral) problem:  reports from Japan of a mysterious new disease afflicting survivors of the twin blasts.  Some there were already dubbing it "radiation disease," which was what our bomb-makers and policy-makers expected--but still, officials and most in media in U.S. mocked the idea.  No one from the West had yet reached either city.

Seventy-five years ago this week one of the most remarkable conversation of the nuclear took place. (See partial transcript.)

Gen. Leslie Groves, head of the Manhattan Project (with J. Robert Oppenheimer, above), had received a telex the day before from Los Alamos, as scientists asked for information on those reports from Japan. Groves responded that they were nothing but "a hoax" or "propaganda."  The top radiation expert at Los Alamos also used the word "hoax."  Knowing that the press would be seeking his official response, Groves called Lt. Col. Charles Rea, a doctor at Oak Ridge hospital (part of the bomb project).  According to the official transcript, Rea called the reports of death-by-radiation "kind of crazy" and Groves joked, "Of course, it's crazy--a doctor like me can tell that."

But Groves knew it wasn't crazy and he grew agitated as he read passages from the Japanese reports.  He even asked if there was "any difference between Japanese blood and others."  Both men ultimately seized on the idea that everything was attributable to burns--or "good thermal burns," as Rea put it.  Groves replied, "Of course we are getting a good dose of propaganda"--and blamed some of our scientists and our media for some of that.  Groves revealed, "We are not bothered a bit, excepting for --what they are trying to do is create sympathy."

But Rea surely knew they were merely denying reality, admitting finally, "Of course, those Jap scientists over there aren't so dumb either."  Still, in a second conversation that day with Groves, Rea advised: "I think you had better get the anti-propagandists out."  One of the great quotes of our time.

Five days later, on a visit to Oak Ridge, Groves labelled the reports from Japan propaganda and added, "The atomic bomb is not an inhuman weapon."

Groves' top aide, Kenneth D. Nichols, would admit in his 1987 memoirs that "we knew that there would be many deaths and injuries caused by the radiation..."
Posted by Greg Mitchell at 7:00:00 AM

Thank you so much for such a well-written article. Pikdo is an Instagram Online Viewer that you can easily browse users, location, followers, hashtags, popular contents, statistics and much more. ...