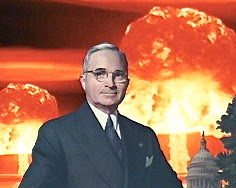 —Early today, Paul Tibbets, pilot of the lead plane, the Enola Gay (named after his mom) on the first mission, reported to Gen. Curtis LeMay’s Air Force headquartters on Guam. LeMay told him the “primary” was still Hiroshima. Bombardier Thomas Ferebee pointed on a map what the aiming point for the bomb would be—a distinctive T-shaped bride in the center of the city, not the local army base. “It’s the most perfect aiming I’ve seen in the whole damned war,” Tibbets said. But the main idea was to set the bomb off over the center of the city, which rests in kind of a bowl, so that the surrounding hills would supply a “focusing effect” that would lead to added destruction and loss of life in city mainly filled by women and children.

—By 3 p.m., top secret orders were being circulated for Special Bombing Mission #13, now set for August 6, when the weather would clear. The first alternate to Hiroshima was Kokura. The second, Nagasaki. The order called for only “visual bombing,” not radar, so the weather had to be okay. Six planes would take part. Two would escort the Enola Gay, one would take photos, the other would be a kind of mobile lab, dropping canisters to send back scientific information.

—Meanwhile, three B-29s arrived at Tinian carrying from Los Alamos the bomb assemblies for the second Fat Man device (which would use plutonium, the substance of choice for the future, unlike the uranium bomb meant for Hiroshima).

—Japanese cables and other message intercepted by the United States showed that they were still trying to enlist the Soviets' help in presenting surrender terms--they would even send an envoy--but were undecided on just what to propose. The Russians, meanwhile, were just five days from declaring war on Japan.

--Top U.S. officials were on now centering on allowing the Japanese to keep their emperor when they give up.  In his diary Secretary of War Stimson endorses a key report which concludes: "The retention of the Emperor will probably insure the immediate surrender of all Japanese Forces outside the home islands."  Would offering that win a swift Japanese surrender--without the need to use the bomb?  Not considered.

—Six years ago earlier on this day, August 2, 1939, Albert Einstein sent a letter to President Roosevelt stating the Germans were trying to enrich uranium 235—and that this process would allow them to build an atomic bomb. This helped spark FDR’s decision to create the Manhattan Project.
Posted by Greg Mitchell at 7:30:00 AM

try to find about Hirosima and Nagasaki. I was interested in such topic to find it out. college admission essay royal editing services I am pleased to have found your site.

Therefore busy in gambling sites will be quite crowded because Agen SBOBET it can create a large profit in it. Except this busyness will actually be able to bring you to create significant and drastic profits if you have great promise and motivation in carrying out transactions in it
http://makeland.link/crazyslot/
https://bet365kor1.com/
https://daora5.com/
http://makeland.link/higaming/
https://powerball888.com/powerball/
https://ocn2001.com/