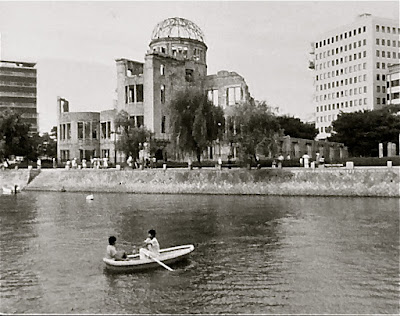 Each summer I count down the days to the atomic bombing of Japan (August 6 and August 9, 1945),  marking events from the same day in 1945.  I've been doing it here for more than two weeks now.    I've written  three books and ebooks on the subject including   Hiroshima in America (with Robert Jay Lifton) and Atomic Cover-Up (on the decades-long suppression of shocking film shot in the atomic cities by the U.S. military). My photo taken on a later August 6, at left.

—Hiroshima remains the primary target, with Kokura #2 and Nagasaki third. The aiming point was directly over the city, not the military base or industrial quarter, guaranteeing the deaths of tens of thousands of women and children.   The surrounding hills, it was known, would provide a "focusing effect" that would kill more.

—Pilot Paul Tibbets formally named the lead plane in the mission, #82, after his mother, Enola Gay. A B-29 that would take photos on the mission would be named Necessary Evil.

—Also on Tinian, Little Boy is ready to go, awaiting word on weather, with General Curtis LeMay to make the call. At 3:30 p.m., in an air-conditioned bomb assembly hut, the five-ton bomb as loaded (gently) on to a trailer. Crew members scribbled words onto the bomb in crayon, including off-color greetings for the Japanese. Pulled by a tractor, accompanied by a convoy of jeeps and other vehicles, the new weapon arrives at the North Field and is lowered into the bomb pit.

--The bomb is still not armed. The man who would do, before takeoff, according to plan, was Parsons. But he had other ideas, fearing that the extra-heavy B-29 might crash on takeoff and taking with it “half the island.” He asked if he could arm the bomb in flight, and spent a few hours—on a hot and muggy August day—practicing before getting the okay.

—Pilot Tibbets tries to nap, without much success. Then, in the assembly hall just before midnight, he tells the crew, that the new bomb was “very powerful” but he did not mention the words “nuclear,” “atomic’ or “radiation.” He calls forward a Protestant chaplain who delivers a prayer he’d written for this occasion on the back of an envelope. It asks God to “to be with those who brave the heights of Thy heaven and who carry the battle to our enemies.”

— The Soviets are two days from declaring war on Japan and marching across Manchuria. Recall that Truman had just written in diary "Fini Japs" when the Soviets would declare war, even without the Bomb.  (See new evidence that it was the Soviet declaration of war, more than the atomic bombing, that was the decisive factor in Japan's surrender.)

—Halfway around the world from Tinian, on board the ship Augusta steaming home for the USA after the Potsdam meeting, President Truman relaxes.  His announcement on the bombing--calling the large city merely a "military base"--has already been written.  Truman’s order to use the bomb had simply stated that it could be used any time after August 1 so he had nothing to do but watch and wait. The order included the directive to use a second bomb, as well, without a built-in pause to gauge the results of the first and the Japanese response—even though the Japanese were expected, by Truman and others, to push surrender feelers, even without the bomb, with Russia’s entry into the war on August 7.
Posted by Greg Mitchell at 9:40:00 AM

Thanks for the post, this is informative.
We offer 11% paperhelp discount code for students. To apply promo code, just click "Apply" and proceed with the order, discount will be applied automatically.

Things are very open and intensely clear explanation of issues. It was truly information. Your website is very beneficial. Click link to visit my site that will help you having a virtual world as the same as your real world you living. sims 4 cheats

Riya said...
This comment has been removed by a blog administrator.
Friday, April 24, 2020

Home appliance repair Dubai said...
This comment has been removed by the author.
Tuesday, May 19, 2020