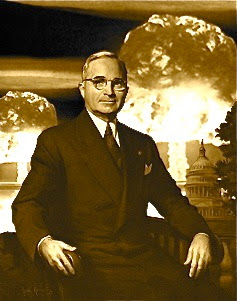 Each summer I count down the days to the atomic bombing of Japan (August 6 and August 9, 1945),  marking events from the same day in 1945.  I've been doing it here for more than two weeks now.    I've written  three books on the subject including Hiroshima in America (with Robert Jay Lifton) and Atomic Cover-Up (on the decades-long suppression of shocking film shot in the atomic cities by the U.S. military).

--On Tinian, Little Boy is ready to go, awaiting word on weather, with General LeMay to make the call. Taking off the night of August 5 appears most likely scenario.

--On board the ship Augusta steaming home for USA after Potsdam meeting, President Truman, Joint Chiefs chairman Admiral Leahy, and Secretary of State James F. Byrnes--a strong A-bomb booster--enjoy some poker.   Byrnes aide Walter Brown notes in his diary that "President, Leahy, JFB [Byrnes) agreed Japan looking for peace. (Leahy had another report from Pacific.) President afraid they will sue for peace through Russia instead of some country like Sweden."

--Leahy had questioned the decision to use the bomb, later writing: "[T]he use of this barbarous weapon at Hiroshima and Nagasaki was of no material assistance in our war against Japan. The Japanese were already defeated and ready to surrender.... [I]n being the first to use it, we...adopted an ethical standard common to the barbarians of the Dark Ages. I was not taught to make war in that fashion, and wars cannot be won by destroying women and children."

--Our "Magic" intercepts show Japan monitoring the Soviets' military buildup in the Far East (prelude to the declaration of war in four days).  Also, Japanese still searching for way to approach Molotov to pursue possible surrender terms before that happens. Another Magic intercept carried the heading, "Japanese Army's interest in peace negotiations." War Department intel analysts revealed "the first statement to appear in the traffic that the Japanese Army is interested in the effort to end the war with Soviet assistance." A segment of Prime Minister Togo's message declared: "The Premier and the leaders of the Army are now concentrating all their attention on this one point."

John McCloy, then assistant secretary of war and a well-known "hawk" in his later career, would later reflect, "I have always felt that if, in our ultimatum to the Japanese government issued from Potsdam [in July 1945], we had referred to the retention of the emperor as a constitutional monarch and had made some reference to the reasonable accessibility of raw materials to the future Japanese government, it would have been accepted. Indeed, I believe that even in the form it was delivered, there was some disposition on the part of the Japanese to give it favorable consideration. When the war was over I arrived at this conclusion after talking with a number of Japanese officials who had been closely associated with the decision of the then Japanese government, to reject the ultimatum, as it was presented. I believe we missed the opportunity of effecting a Japanese surrender, completely satisfactory to us, without the necessity of dropping the bombs."

--Soviet General Vasilevskii reports to Stalin that Soviet forces ready for invasion from August 7 on.
Posted by Greg Mitchell at 10:30:00 AM

When the war was over I arrived at this conclusion after talking with a number of Japanese officials who had been closely associated with the decision of the then Japanese government, experts create helpers
to reject the ultimatum, as it was presented.

it's near our end, glad that the war was ended,