Hiroshima Pilot Didn't Lose Any Sleep Over It

Paul W. Tibbets, pilot of the plane, the "Enola Gay" (named for his mother), which dropped the atomic bomb over Hiroshima on August 6, 1945. died at 92 in 2007,  defending the bombing to the end of his life. Some of the obits noted that he had requested no funeral or headstone for his grave, not wishing to create an opportunity for protestors to gather.
I had a chance to interview Tibbets nearly 30 years ago, and wrote about it for several newspapers and magazines and in my book published this week,   THE BEGINNING OR THE END:  How Hollywood--and America--Learned to Stop Worrying and Love the Bomb,  Later I got to meet and sit next to the pilot who dropped the bomb over Nagasaki, Charles Sweeney, on Larry King's CNN show.  I wonder how many other writers have met both of them (and also journeyed to the two atomic cities and met dozens of survivors).
The hook for the Tibbets interview was this: While spending a month in Japan on a grant in 1984, I met a man named Akihiro Takahashi. He was one of the many child victims of the atomic attack, but unlike most of them, he survived (though with horrific burns and other injuries), and grew up to become a director of the memorial museum in Hiroshima.
Takahashi showed me personal letters to and from Tibbets, which had led to a remarkable meeting between the two elderly men in Washington, D.C. At that recent meeting, Takahashi expressed forgiveness, admitted Japan's aggression and cruelty in the war, and then pressed Tibbets to acknowledge that the indiscriminate bombing of civilians was always wrong.
But the pilot (who had not met one of the Japanese survivors previously) was non-committal in his response, while volunteering that wars were a very bad idea in the nuclear age. Takahashi swore he saw a tear in the corner of one of Tibbets' eyes. 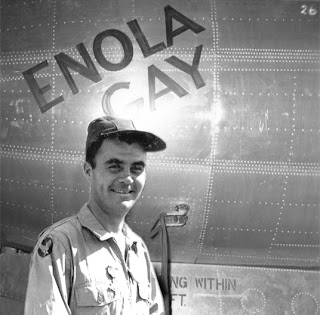 So, on May 6, 1985, I called Tibbets at his office at Executive Jet Aviation in Columbus, Ohio, and in surprisingly short order, he got on the horn. He confirmed the meeting with Takahashi (he agreed to do that only out of "courtesy") and most of the details, but scoffed at the notion of shedding any tears over the bombing. That was, in fact, "bullshit."

"I've got a standard answer on that," he informed me, referring to guilt. "I felt nothing about it. I'm sorry for Takahashi and the others who got burned up down there, but I felt sorry for those who died at Pearl Harbor, too....People get mad when I say this but -- it was as impersonal as could be. There wasn't anything personal as far as I?m concerned, so I had no personal part in it.
"It wasn't my decision to make morally, one way or another. I did what I was told -- I didn't invent the bomb, I just dropped the damn thing. It was a success, and that's where I've left it. I can assure you that I sleep just as peacefully as anybody can sleep."  When August 6 rolled around each year "sometimes people have to tell me. To me it's just another day."
In fact, he wrote in his autobiography, The Tibbets Story, that President Truman at a meeting in the White House after the bombing had instructed him not to lose any sleep over it. "His advice was appreciated but unnecessary," Tibbets explained.
In any event, Tibbets (like Truman) had acted in a consistent manner for decades, while at times traveling under an assumed name to avoid scrutiny. After the war he called Hiroshima and Nagasaki "good virgin targets" -- they had been untouched by pre-atomic air raids -- and ideal for "bomb damage studies." In 1976, as a retired brigadier general, he re-enacted the Hiroshima mission at an air show in Texas, with a smoke bomb set off to simulate a mushroom cloud. He intended to do it again elsewhere, but international protests forced a cancellation.
He told a Washington Post reporter, for a favorable profile, in 1996, "For awhile in the 1950s, I got a lot of letters condemning me...but they faded out." On the other hand, "I got a lot of letters from women propositioning me."
In THE BEGINNING OR THE END:  How Hollywood--and America--Learned to Stop Worrying and Love the Bomb,  I recall Tibbets' role as a paid consultant to the 1953 Hollywood movie, Above and Beyond, with Robert Taylor in the pilot role. In the key scene, after releasing the bomb and watching Hiroshima go up in flames below, Taylor radios in a strike report. "Results good," he says. Then he repeats it, bitterly and with grim irony.
But that was not in the Tibbets-approved original script for the film. It was added later, presumably to show that the men who dropped the bomb recognized the tragic nature of their mission.
Tibbets criticized the scene when the film came out.
Posted by Greg Mitchell at 11:03:00 PM