'Vonnegut and Me' Now Only 99 Cents

My modest e-book from a few years back Vonnegut and Me:  Conversations and Close Encounters (Sinclair Books),  just went on sale today, for a few days,  at just $0.99.  For Kindle, iPad, PCs and Mac, etc.   Here's the summary below. My first encounter?  Exactly 50 years ago this summer after I came to NYC out of college.    And my brand new book, on a theme that Vonnegut was famous for--remember Ice-9 and also the Tralfamadore-related end of the world?--is here:  The Beginning or the End:  How Hollywood--and America--Learned to Stop Worrying and Love the Bomb.
*** 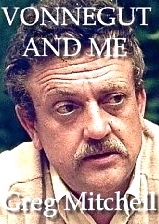 Kurt Vonnegut, more than a decade after his passing, remains one of the most popular and influential novelists of the past half-century. Now Greg Mitchell, award-winning author and magazine writer--and a Vonnegut fan going back to Cat's Cradle--recounts for the first time his "conversations and close encounters of the weird kind" with the novelist starting in 1970, just after Vonnegut first reached a mass audience with his classic Slaughterhouse-Five, and continuing for years.

It's an insightful, unique and often very funny profile of the artist as he confronts unexpected fans, fame and fortune. Vonnegut hailed one of Mitchell's pieces about him as "daring and imaginative...I admire you terrifically as a writer." Later he would offer a positive "blurb" for one of Mitchell's many books, Hiroshima in America.

Mitchell quotes extensively from his interviews with Vonnegut, and from letters the novelist sent him over the years. It's all vintage Vonnegut: on war and pacifism, drugs and booze, writing and the difficulties in writing, his many young fans--and growing old himself. Hard truths and "benign lies." Nixon and Bush.  Vietnam and Nagasaki.  With plenty of dark humor along the way.

Included in its entirety is one of the most acclaimed profiles of Vonnegut: Mitchell's 1974 cover story for the legendary Crawdaddy magazine. Mitchell, the first to write under the byline of Vonnegut's most famous creation, Kilgore Trout, combined quotes from his actual interview with Vonnegut with a wild fictional reunion of the novelist's other recurring characters one day in New York--a tribute to his greatest work (and cleverest lines). Vonnegut's response: "Against all odds, hey presto, you made the chips all fit together in the same machine. Nice, nice, very nice."

Early on, Vonnegut informed Mitchell: "I have decided that I have been stupid about life, have been unnecessarily unhappy for too long, and it is too early to give any reports on my belated to pursuit of happiness." This cogent and witty book, Vonnegut and Me, shows and tells part of what happened in that pursuit from 1970 to the novelist's death in 2007 (so it goes).
__

I would like to have your Vonnegut book, but while you list a number of digital formats, the link to Amazon offers only the Kindle version. How do I get the PC version?

Ned, thanks. Kindle has free apps (even without having a Kindle) for iPads, phones, PCs. Or you purchase and they tell you that you can access for PC in the "cloud." Thanks again.