The 'Double Hibakusha'--Bombed in Both Atomic Cities 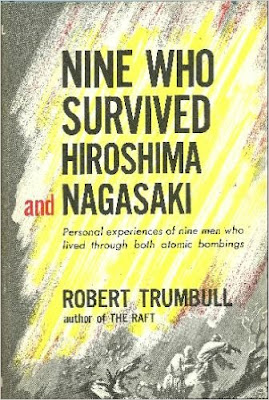 When I was a kid, my best friend Paul, in his animated way, told me (more than once) the story of a Japanese man who supposedly arrived in Nagasaki one day and while walking along a road told a friend about the unearthly bright flash he had seen in the sky over Hiroshima just three days before. Then it appeared again and the man said, "Just like... that!"

Of course, I knew that Paul was making this up. It certainly never appeared in any of my school books. Imagine my surprise, many years later, when I learned, while visiting Japan, that the tale was basically true. A dozen or more Japanese men and women (the number is contested, because some were pretty distant from the blasts) are indeed considered "double hibakusha" -- survivors of both bombs.

I even got to interview one of them in Nagasaki.

Two atomic weapons have been used in wartime, and Kenshi Hirata, a diminutive, sad-faced accountant, experienced both of them.

When the bomb hit Hiroshima on August 6, 1945, Hirata was at work at the Mitsubishi shipyards two miles from ground zero. He escaped serious injury, but after wandering around the center of Hiroshima for two days, searching for his wife, he'd seen and smelled quite enough death. Somehow some trains were still running and he caught the first one leaving for his home town: Nagasaki. He carried with him the bones of his wife.

When it reached Nagasaki at 10:30 the following morning, he headed for home, a half-hour walk. His mother was relieved to see him, for she had heard that a new type of bomb had been used in Hiroshima. Hirata excitedly started describing the frightening white flash he had observed in the sky three days earlier -- when he saw it again through the front window about two miles away (so my friend's story was not so far off).

As one of the world's leading authorities on the effects of the atomic bomb, Hirata was a good man to have around the house. Grabbing his mother, he dove under a table as their windows blew in.

"The bomb that makes this white flash must be following my every step," Hirata thought afterward, as they cleaned up the broken glass. This time he did not go out and wander around the epicenter, his curiosity about new weapons that flash in the sky and blow out windows two miles away pretty much satisfied. He did not leave the house for weeks. "I did not want to see such sad, miserable sights again," he told me.

One had to appreciate the absurdity. Twice cursed or twice blessed? If you were A-bombed twice within three days, and survived, and went on to live a full, healthy life, would you consider yourself doubly unlucky or doubly lucky? "I felt so dishonored that I had to experience the atomic bomb twice," Hirata said, explaining why he had not talked about this until recently. "It's nothing to be boastful about. I could not talk to anyone about it because almost no one else met the bomb twice. So there was no one who could sympathize with me."