The Photographer and the Flash 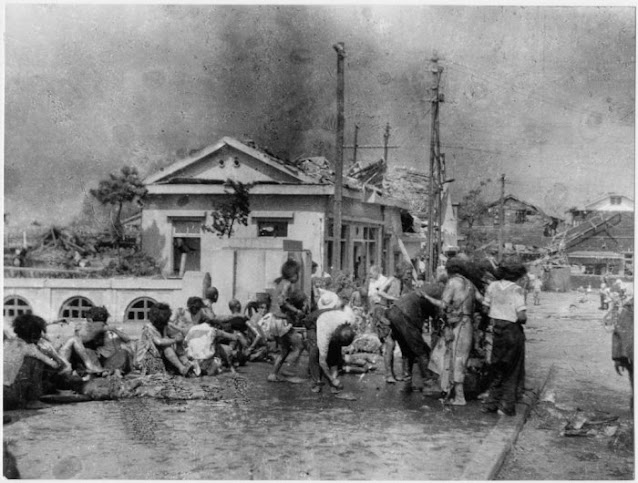 Yoshito Matsushige, a photographer for the Chugoku Shimbun, took the only pictures in Hiroshima on August 6, 1945, that have surfaced since. It was these five photos LIFE magazine published on September 29, 1952, hailing them as the "First Pictures - Atom Blasts Through Eyes of Victims"--briefly breaking the long media blackout on graphic images from Hiroshima and Nagasaki.   (Ignoring such evidnence continued for decades, however, as charted in my new book, The Beginning or the End: How Hollywood--and America--Learned to Stop Worrying and Love the Bomb.)

On August 6, 1945, Matsushige wandered around Hiroshima for ten hours, carrying one of the few cameras that survived the atomic bombing and two rolls of film with twenty-four possible exposures. This was no ordinary photo opportunity. He lined up one gripping shot after another but he could only push the shutter seven times. When he was done he returned to his home and developed the pictures in the most primitive way, since every dark room in the city, including his own, had been destroyed. Under a star-filled sky, with the landscape around him littered with collapsed homes and the center of Hiroshima still smoldering in the distance, he washed his film in a radiated creek and hung it out to dry on the burned branch of a tree.

Five of the seven images had survived, and they are all the world will ever know of what Hiroshima looked like on that day. Only Matsushige knows what the seventeen photos he didn't take would have looked like. Even more graphic film footage, remained hidden for decades (as I probe in my new book Atomic Cover-up).
.
Two of his pictures have been widely reprinted in magazines and books. In one, a ragged line of bomb victims sit along the side of Miyuki Bridge, two miles from ground zero, legs folded to their chests. It's hard to tell if it is torn clothing or skin that hangs from them in tatters. No one cries out. They simply stare at what lies across the bridge: a tornado of flame and smoke rushing toward the suburbs. The second picture is a tighter version of the first, focusing on a policeman and a few school girls standing in the center.

All of the figures in the two photos have their backs to the photographer and are staring at the approaching holocaust. Although many in these images no doubt died later, neither of these pictures shows a single corpse. Yet the two photos capture the horror of the atomic bombing better than any panoramic image of twisted buildings and rubble (and so, like the film footage, they had to be suppressed in America for many years). Perhaps that is because the people in Matsushige's pictures are feeling more than the lingering effects of the blast -- they are still experiencing the bomb itself. "Little Boy" has not yet finished with them or their city. The terror evident in the way the victims are standing or sitting in these grainy black and white photographs says more about the human response to the monstrous unknown than any Hollywood recreation.

And because the photographer has the same perspective as his victims we see what they see. We are on that road to Hiroshima, three hours after the bomb fell, staring into the black whirlwind.

The pictures are so affecting because ever since that day, all of us have, in a sense, been standing on that road to Hiroshima, alive but anxious, and peering into the distance at the smoke and firestorm.

When Matsushige, then retired came to meet me in an eighth-floor conference room at his old newspaper -- a small man, dapper in white shoes -- he explained that he could not take more photos that day because "it was so atrocious" and he was afraid burned and battered people "would be enraged if someone took their picture." He tried to capture more images but he could not "muster the courage" to press the shutter.

A few weeks later, the American military confiscated all of the post-bomb prints, just as they seized the Japanese newsreel footage, "but they didn't ask for the negatives," Matsushige said, grinning like a cat. These were the pictures that caused a stir worldwide when they appeared in Life seven years later.  No photographic images of Nagasaki taken on August 9 have survived.  And the U.S. suppressed film footage shot by our own military for decades.

"Sometimes I think I should have gathered my courage and taken more photos, but at other times I feel I did all I could do," he added. "I could not endure taking any more pictures that day. It was too heartbreaking." With that, Matsushige packed up his belongings, bowed deeply, and left the room, vibrant in straw hat, blue suit and bright white shoes, carrying in his arms a portfolio of pictures that are utterly unique, and must remain so.