The Missing My Lai Story 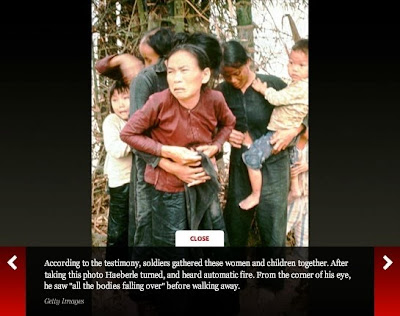 Everyone knows that most famous atrocity photo from Vietnam--the naked girl with napalm on her skin running down a road in terror.  Not long ago I posted here about an amazing update on the photo at the terrific site that focuses on news photos, Bag News Notes.  Now they've just posted an in-depth and important piece, by Valerie  Wieskamp, on another famous photo from the war--the one showing frightened villagers at My Lai just moments before getting gunned down by U.S. troops.

What this piece reveals is the largely "missing" story--that villagers were also raped or sexually brutalized just before the shootings.   One of them, in fact, is the young woman in the right rear of this photo, who is shown buttoning up her blouse.  The rapes were clearly documented at the time--by the photographer, a reporter, and later by the official commission--but downplayed by the media back then, and now almost always ignored when today's media revisit the tragedy.  Why? Especially with the image of a young woman re-buttoning her blouse.    There's much more in the piece, so read it now.
Posted by Greg Mitchell at 10:57:00 AM