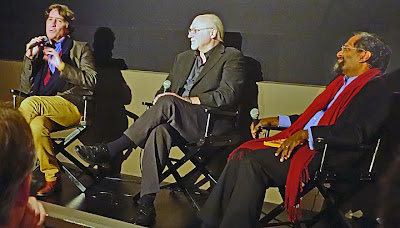 We had a terrific sold out evening last night at Lincoln Center for the NYC premiere of Following the Ninth, our unique film on the amazing influence of Beethoven's final symphony (I am co-producer).  After it drew multiple bursts of applause from the audience, I moderated a panel with director Kerry Candaele and conductor George Mathew.  Now the film opens for a full week at the Quad Cinema downtown on 13th St. starting Friday.   It's old home week for me, as the Quad is still half a block from my old Crawdaddy office and I was there for its opening--in 1972.  Kerry and I will be speaking Friday, with Robert Jay Lifton added Saturday, all co-sponsored by The Nation.  Full details, trailer, ticket info here. (Photo at left of the panel by Hal Weiner)
Posted by Greg Mitchell at 8:30:00 AM