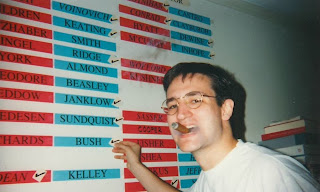 Boston Globe got its hands on a clip of Ted Cruz acting in, wait for it, Arthur Miller's Salem witch-hunting (and anti-McCarthyism) classic The Crucible back at Harvard in 1992.  Not the greatest video quality but the horrid voice is unmistakable.   His lines, the Globe notes, show  "parallels to his political future."  The pastor he played complained that he had a lot of enemies who wanted to drive him from the pulpit.  And see this amazing photo from 1994.  And full story here.


Interviews with more than two dozen alumnae and professors fill in a portrait of Cruz, in Cambridge two decades ago, that would be fully recognizable to those who know him now in Washington. He made a lasting impression as someone both arrogant and pretentious, as well as someone unwilling to yield or compromise.