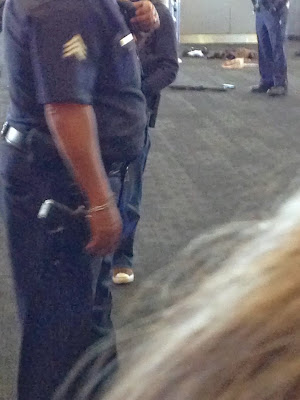 Pete Williams at NBC just reported that one TSA agent dead.  Photo at left allegedly of AR-15 used on the floor.

NBC in L.A. says witnesses report 8 to 10 shots. Shooter in custody.  One witness describes as young man in short blond hair.  Police say incident "probably" over.  Bill Reiter of FoxSports was at scene and witnessed terrified chaos. He's tweeting @Foxsportsreiter.  "After the initial burst of gunfire and hiding, people started jumping over one another, jumping off chairs, pushing each other. Chaos & fear."   NBC's Pete Williams: Suspect pulled out rifle and shot document checker at TSA checkpoint. Large box of ammo found.

LA Times:  an agent shot at #LAX says “I got shot, I’m fine.” Says he's been shot before (presumably NOT at LAX).

CBS: suspect in camouflage outfit.  Witness says he asked him if he was TSA and he said no, so moved on.  Now the usual claim that may be 2nd gunman.  But doubtful.

Classic actual tweet from Walter "Up in the Air" Kirn:  "About to land at LAX and see from the net there's some kind of shooting there."  Jeremy Scahill tweets: "Our flight just got diverted from LAX."

Just happened at 12:30 ET.  Two terminals evacuated.  TSA agent shot in leg, another (or passenger) reportedly in the mouth, both taken to hospital.  Some confusion on others wounded or not.   Suspect reported wounded.   KTLA live coverage here.
Posted by Greg Mitchell at 1:09:00 PM