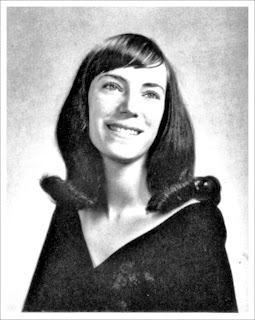 Patti Smith turns 68 (!) this week.  So, looking back:  It was 1975.  Patti had just started recording with Lenny Kaye and her original band but her first album, Horses, would not be released until the end of that year. But I'd followed her work for several years and felt certain she was about to break through.

The article—which she gave me over coffee in a shop that used to exist just below our Crawdaddy office at 13th Street and Fifth Avenue (which we later turned over to The Nation)—was titled "Flying Saucers Rock and Roll." It recalled her childhood in New Jersey and then the move to New York City where she experienced Jimi Hendrix, and met Mapplethorpe in 1967.

You can read most of it here. One passage, more evocative than ever given the period covered in her (now) award-winning memoir, follows. (For more Crawdaddy fun from that era, see excerpt from my ebook on Kurt Vonnegut.)


Destiny plagued me. I never slept, I laid, and watched the night unravel like the future. Music crystallized like snowflakes; gradually the entire storm. Guitar necks sticking out of the ground like bayonets. The war between sounds. Alexander coming to conquer with a fender and a saucer. I knew it was coming and I wanted to be in on it. I knew it came and went and I wasn't in on it.

I was at this party. All I knew was James Brown and somebody put on "Third Stone from the Sun." Everybody was looking at me, so I pulled out my whistle, the one shaped like a cigar with black pick-ups. By the end of "Foxy Lady" it was pure amp damage. They were banging their pates into the plaster but I was laughing hysterically. The ones who ripped their wigs fascinated me the most, to watch these bald and slick comet shapes rushing the walls. It reminded me of something, but I was too giddy to get my mind shining. I wasn't in on it, wasn't in on it, I couldn't stand it. I wasn't born to be a spectator.

It was 1966 '67 '68. Every place I went it was somebody else. I could-not-live-today. Too plugged into sanguine rhythms past and the silver video we call future. Here I come future, coming to get ya. I see it all moving on an immense yellow highway. They come on like trumpets and violins—cars, armies of cars that move off the ground, glowing cigar shapes, and the radio just pumps like a fist. Brick roads, turnpikes, they drive me insane 'cause I can see what's coming. ELP, ELO, nothing real 'cept UFO. Got to be royal rock warfare cause it's sitting in limbo. Not what was and not what will be. Rock got to move out of its stagnant moment. Pray for something bubbling under the sky's canopy to rip open and rush like gas.

Email ThisBlogThis!Share to TwitterShare to FacebookShare to Pinterest
Labels: Patti Smith
Greg Mitchell
is author of a dozen books (click on covers at right), including the new "THE TUNNELS: Escapes Under the Berlin Wall and the Historic Films the JFK White House Tried to Kill." He was the longtime editor of Editor & Publisher. Email: epic1934@aol.com. Twitter: @GregMitch

Since 67 is a prime number, technically she's in the prime of her life!