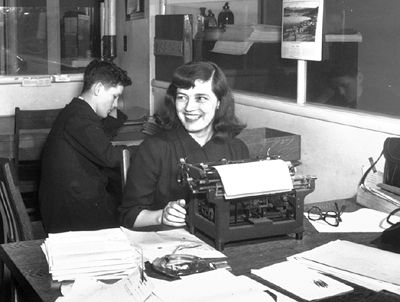 Let's take a moment and say good-bye to the incomparable short story writer Mavis Gallant, who died in Paris at age 91.

Her postwar Paris was not the romantic landscape of so many American writers, but the haunted gathering place of survivors of mid-twentieth-century Europe's catastrophes--displaced persons, prisoners of war, impoverished ex-pats.  "There was also a joint past that lay all around us in heaps or charred stone," she wrote in her short story, "An Alien Flower."  The streets "still smelled of terror and ashes, particularly after rain. Every stone still held down a ghost, or a frozen life, or a dreadful secret."

The Globe and Mail of her native Canada (she emigrated to Paris in 1950) well describes her particular gifts:

Ms. Gallant had a journalist’s nose, a cinematographer’s eye and a novelist’s imagination. She combined her technical skills and sensory perceptions in the shrewdly observed and multi-layered short story, a form she made her own. A specialist in writing about outsiders trying to insinuate themselves into alien situations and cultures, her narratives move in waves of dialogue, observation and lashing tension. Reading her stories gives one a sense of a clock ticking, a door creaking open, or of an emotional wound about to be inflicted.

Seek out her Collected Stories, and be prepared for a sensory and emotional immersion. My favorite has remained "In the Tunnel," with its enigmatic closing lines:  "some summer or other would always be walking on her grave."  -- Barbara Bedway
Posted by Greg Mitchell at 2:56:00 PM