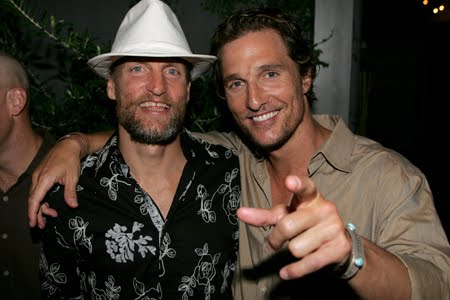 Earlier:  Andy Greenwald is not a big fan of "True Detective" but makes some interesting points in this piece.  And I love his closing idea that we really deserve one sit-com episode of Rust and Marty as new roommates.

"I’m talking about Martin Hart and Rust Cohle: wacky roommates! How could the greatest potential sitcom of all time be brushed aside in a single montage? I demand an entire hour of the two of them trying to figure out the coffee maker, weighing baking soda for counterfeit coke, and injecting each other with household spices. Is it too much to ask for one classic mid-’90s night in which Rust and Marty eat Andy Capp’s Hot Fries, do pull-ups, and watch 120 Minutes while waiting for the 1 a.m. SportCenter with Rich and Stu to start? I definitely don’t know where True Detective is going. Considering the leaps in style and sanity it took last night, I don’t think anything we’ve seen even counts as prologue. But I do know where it could have been. Opportunity missed!"
Posted by Greg Mitchell at 10:35:00 PM