Wendy, Can You Break This Trap? 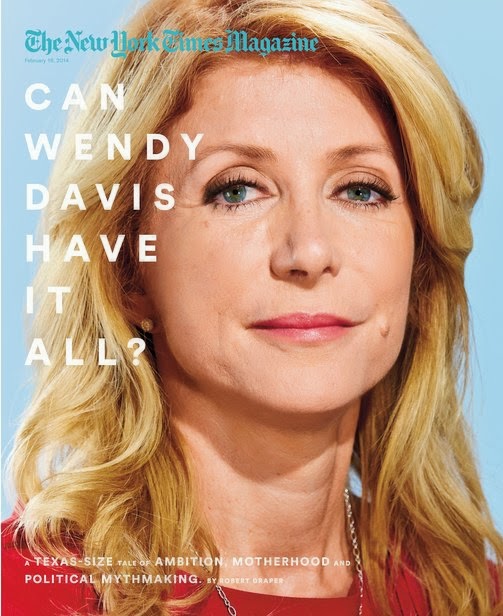 February 22:    NYT's excellent public ed. Margaret Sullivan with new column on the Robert Draper piece on Wendy Davis., finding much to fault, both the cover line and some of the story itself.  "I’m not sure what The Times’s next major article on a female politician will be. But I’m hopeful that not only will it avoid strange planetary depictions and ’70s-era catchphrases, but also that it will rise above gender-based double standards, leaving them where they belong: in the dust of history."

Update to above: The author of the piece, Robert Draper, posts on Facebook that he disagrees with Sulliview's view of his focus on Davis's life story--and claims she "misrepresents" another writer's critique.  "I don't agree with Margaret--I think when a politician calculatedly runs on his/her life story & the representation of that story proves to be inaccurate, reporters are required to examine that story in detail, else they become complicit in the narrative-shading. (She also misrepresents the viewpoint of Rebecca Traister, seeming to suggest Rebecca found fault with my piece when she didn't.) Still, reasonable minds can disagree on this, and I appreciate her even-tempered critique of a story that apparently caused heads of all denominations to explode." I've asked Sullivan for a response but she has declined for now.

Draper has also added a Comment to his original Facebook post:  "There's no question that if the art dept. had gone with a glam shot, we would've rightfully caught hell for it. That said, on a certain level it's kind of weird that so much scrutiny for gender bias has been devoted to a story that, far more than any other previous to it, unambiguously portrays her as a person of intelligence, accomplishment & substance (rather than just an icon or cartoon). But what the hell--I did my scrutinizing, so others are free to do the same."

February 13:  NYT Magazine cover this Sunday coming on Wendy Davis (at least she's not another woman-on-the-moon).  Story here.  My longer take, with criticism from others, at The Nation now.
Posted by Greg Mitchell at 10:00:00 AM