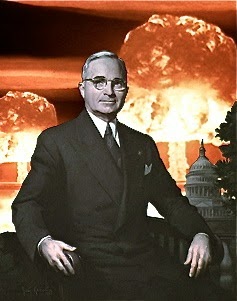 Gen. Dwight D. Eisenhower, commander of U.S. troops in Europe, has visited President Truman in Germany, and would recall what happened in his memoir (Mandate for Change): "Secretary of War Stimson, visiting my headquarters in Germany, informed me that our government was preparing to drop an atomic bomb on Japan. I was one of those who felt that there were a number of cogent reasons to question the wisdom of such an act...

"During his recitation of the relevant facts, I had been conscious of a feeling of depression and so I voiced to him my grave misgivings, first on the basis of my belief that Japan was already defeated and that dropping the bomb was completely unnecessary, and secondly because I thought that our country should avoid shocking world opinion by the use of a weapon whose employment was, I thought, no longer mandatory as a measure to save American lives. It was my belief that Japan was, at that very moment, seeking some way to surrender with a minimum loss of 'face'. The Secretary was deeply perturbed by my attitude..."

In a Newsweek interview, Ike would add: "...the Japanese were ready to surrender and it wasn't necessary to hit them with that awful thing."

-- Stimson, now back at the Pentagon, cabled Truman, that he had drafted a statement for the president that would follow the first use of the new weapon--and Truman must urgently review it because the bomb could be used as early as August 1. Stimson sent one of his aides to Germany with two copies of the statement. The top secret, six-page typed statement opened: "____ hours ago an American airplane dropped one bomb on ______ and destroyed its usefulness to the enemy. That bomb has more power than 20,000 tons of TNT.... It is an atomic bomb. It is a harnessing of the basic power of the universe." Later, as we will see, the claim that Hiroshima was merely "a military base" was added to the draft.

--After scientists sifted more data from the July 16 Trinity test of the first weapon, Gen. Leslie R. Groves, military head of the Manhattan Project provided Gen. George Marshall, our top commander, with more detail on the destructive power of atomic weapons. Amazingly, despite the new evidence, Groves recommended that troops could move into the "immediate explosion area" within a half hour (and, indeed, in future bomb tests soldiers would march under the mushroom clouds and receive harmful doses of radiation). Groves also provided the schedule for the delivery of the weapons: By the end of November more than ten weapons would be available, in the event the war had continued.

--Groves faced a new problem, however. Gen. "Tooey" Spaatz on Guam urgently cabled that sources suggested that there was an Allied prisoner of war camp in Nagasaki just a mile north of the center of the city. Should it remain on the target list?" Groves, who had already dropped Kyoto from the list after Stimson had protested, refused to shift. In another cable Spaatz revealed that there were no POW camps in Hiroshima, or so they believed. This firmed up Groves's position that Hiroshima should "be given top priority," weather permitting. As it turned out, POWs died in both cities from the bombing.
Posted by Greg Mitchell at 8:23:00 AM

Amazing blog I learned so many things from your article, I really thank you for informative ;)
hasil bola
berita olahraga
dunia sport
berita trending
trens berita