Monday Updates (From the Top) on Gaza-Israel Tragedy

(Frequent postings all day, as I've been doing for nearly the past week.) 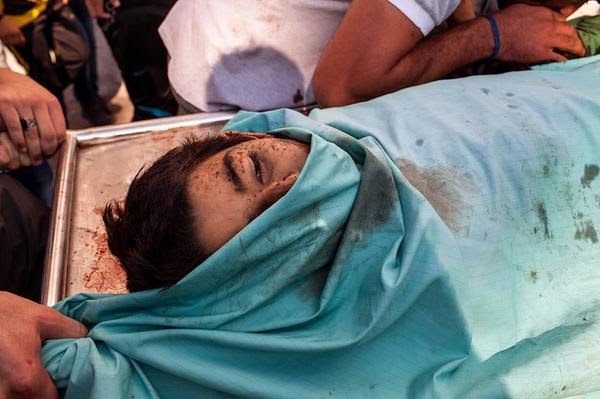 Well, I've had an interesting back and forth tonight with 1) a well-known Hollywood director and 2) CNN's Jake Tapper.   Jake did a segment on the tunnels today that, as I complained, did not reveal how many Israelis have been killed due to them over many years; did not explain why Israel is using them as main pretext for slaughter now when he mentioned himself "they've known about them for years"; and why he closed the spot with reference to claims that  Gaza kids may have died in building them when hundreds are perishing now due to Israeli bombing.

CBS legend Bob Schiefer weighs in on the side of Hamas wanting to get as many civilians killed as possible.

Amira Hass column in Haaretz: Israel's "moral defeat" will haunt them for years. "If victory means causing the enemy to pile up a number of slaughtered children on one stretcher, since there are not enough stretchers, then you have won, Chief of Staff Benny Gantz and Defense Minister Moshe Ya’alon – you and the nation that admires you."

A Twitter commenter:  "CNN covering this for Israel like it's an American war. In essence, it is."

Pulitzer-winning editorial write for Wall St. Journal, Bret Stephens writes tonight that he questions number of Gaza casualties, and says to oppose the slaughter is to defend "barbarism." Ironic choice of words, given tonight's carnage (see below).

What appears, from tweets and reports, to be shock and awe--and slaughter--all over Gaza tonight, including another UN school filled with kids hit. U.S. and U.S. media have willingly accepted carnage so tonight--Israelis are topping everything previous, it seems, according to Gazans who have seen the worst in the past.

All Israel has to do is "accidentally" hit one hotel filled with Western journos and then media outlook may change.  And only then.  Although they may claim that the hotel housed rockets or that they had a right to defend themselves from truthful reports by the media.

New video from Jewish Voice for Peace features dozens, including a few celebs, holding up names of dead Gazans.

Apparently Israel today hit a refugee camp and Shifa hospital nearby killing several more kids, photos have been posted (see left).  Israel once again claims not targeting or operating in area and says must have been Hamas rockets--in both cases!  NBC says at least 30 dead, mainly at the camp, and blames Israel: "The Israel Defense Forces told Haaretz that a 'preliminary investigation has found the Israeli army did not fire at the Shifa Hospital, and the fire is believed to have been Hamas.'  However, a NBC News journalist witnessed the attack on the hospital and said it had been fired by an Israeli drone--this attribution, oddly, removed from a revised NBC story, which now highlights Israel's denials.  ("Early reports from the ground said an Israeli drone was responsible for the attack.")


The NYT, as expected, gives equal weight to Israel's denial--and includes this right in the home page headline despite lies about not hitting the UN school last week.

Shifa is the most sophisticated hospital in Gaza.  Israel has hit several other hospitals in recent days.

@DrBasselAbuwarda there tweets: "The dead children r from attacking a park in Alshate camp & it was Simultaneous with attack on Alshifa hospital 10 dead majority r children...the children were wearing new cloths for Al Eid , they were just playing in the par." His Twitter response to Israel's claims that hit by Hamas rocket:  "ARE YOU FUCKING KIDDING ME?"

We reported days ago on two reporters quoting Israeli police spokesman seeming to admit that Israel is not (and never was) certain that the kidnapping and killing of those three teens back in June which set the current crisis in motion had actually been ordered by Hamas (as Israel).  He said it's believed it was actually a small local "cell," perhaps not ordered by Hamas to do this.  Great controversy has erupted since.  Here's a lengthy piece at Vox today by Max Fisher that probes the matter, noting that questions about Israel exploiting the kidnapping have been there since the start.

Don't miss my piece today on shameful David Gregory and NYT "journalism" related to Israel denying it killed anyone at that UN school last week.

Israel says a mortar attack in southern Israel has killed at least three.


Since I cannot ask Hamas, nor do I purport to understand its way of thinking, I ask the leaders of my own country, Prime Minister Benjamin Netanyahu and his predecessors: How could you have wasted the years since the last conflict without initiating dialogue, without even making the slightest gesture toward dialogue with Hamas, without attempting to change our explosive reality? Why, for these past few years, has Israel avoided judicious negotiations with the moderate and more conversable sectors of the Palestinian people — an act that could also have served to pressure Hamas?