As bad and biased as the reporting by the two main NYT reporters in Jerusalem  has been, one hoped for better from Steve Erlanger.  Unfortunately, with rare exception, he has joined in.   And, as always, there is more honest reporting--and criticism of Israel in opinion columns--at the Israeli daily Haaretz.

Note just in the first three Erlanger paragraphs of his lead story today:  accepting the Israeli claims that their maps showed weapons cache at the mosque (as opposed to saying "claimed they showed"); pictured the slaughter of dozens of women and children as merely causing "difficulties" for the Israeli attackers (yesterday in a front-page headline the paper had minimized the crisis by saying it made for an "anxious" Ramadan); and straining to highlight the Hamas response by fudging the fact that the "barrage" of rockets to Tel Aviv are unguided and nearly all fall in desert by suggesting the city was only saved by the Iron Dome defense.


BEIT LAHIYA, Gaza Strip — As Israel’s air war against Hamas and Islamic Jihad fighters in Gaza entered its sixth day on Saturday, a pair of bombings threw the difficulties of the campaign into painful relief: Israel bombed a mosque, which its aerial photos indicated was harboring a weapons cache, and a center for the disabled, killing two residents and wounding three, as well as a caretaker.

A separate strike on the house of a police commander killed at least 18 people, the highest toll so far this conflict, bringing the total number of dead to at least 140, Palestinian officials said.

In response, Hamas fired a barrage of rockets at Tel Aviv, Israel’s largest city, garnering much attention despite causing no deaths or injuries, as three of them were intercepted.

Much of the rest of the piece, you might say, offers a much more nuanced and "balanced" view.  But the heavy-handed writing--or quite possibly,  editing--at the top reflect the paper's need to strongly tilt toward Israel, as always, in its news pages.  Note, in contrast, the latest report at The Guardian, which puts at the very top the appeal for a probe of possible Israeli war crimes by the United Nations' top human rights official.

And one person's view of the BBC coverage: 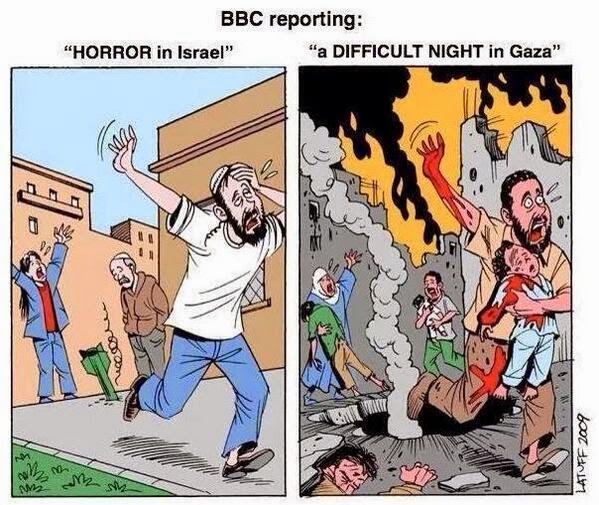