Saturday Updates (From the Top) on Gaza-Israel Tragedy 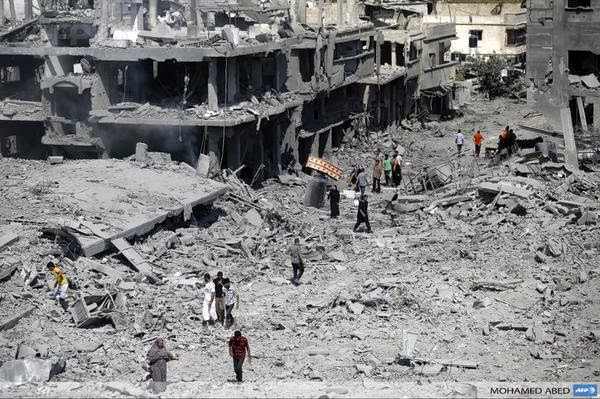 Hollywood's younger stars and other younger celebs, many of them Jewish,  much more willing to criticize Israel than older generation.  Reflects polls showing younger Americans less supportive of Israeli policies.  A Gallup poll shows that most Democrats oppose the Israeli attacks, while Republicans overwhelmingly support.

Wash Post tonight, with straight face, in reviewing current state of war and compares to past conflict, states, "In Lebanon, too, casualties on both sides were high."  Yes puts on equal plain the 45 Israeli dead (military and civilian) and a few dozen injured and the 1045 Palestinian dead and 5700 injured.

The story does reveal this factoid:  one of the 3 Israeli civilians was a Thai worker.  Another was a Bedouin, who are not even recognized as Israelis with full rights.  That means exactly one actual full Israeli civilian (a settler) has been killed.

I reported yesterday on the soon-to-be-famous tweets by Jon Donnison of the BBC reporting that Israel police spokesman Micky Rosenfeld had just told him that contrary to the claims that helped provoke this war Israel did not believe that Hamas had the three Israeli teens killed back in June.  Instead they now believed that it was a local "cell" that Hamas did not direct.  Well.  This was such a blockbuster that many held a wait and see attitude, since Donnison did not quickly produce a segment on it.  But Donnison tonight tweets, "For those asking, I stick by 100% tweets regarding comments made to me by Israeli police spokes Mickey Rosenfeld. He said it. Period....And what's more I suspect what he said is common knowledge in Israeli intelligence circles."

NYT tonight finally changes headline on story it posted this morning-- which declared, "Gazans and Israelis Tally Damage."   I pointed out here (see below) and via Twitter that the story did not, or could not, point to a single example of Israel damage (beyond it reputation and moral standing, perhaps).  Instead, it had Israelis going to the beach ("It's fun"), holding bar-b-qs and visiting soldiers.  Perhaps feeling shame, the paper has finally changed the headline.  It also added  reference to 21 Gazans in one family killed by Israeli shelling last night--but as always reporter allows Israel flack to claim it must have been because of Hamas fire from nearby.

Jodi Rudoren at NYT naturally includes in her fawning profile of Netanyahu tonight a reference to the "anti-Semitic tinge" of protests against Israel's bombing of Gaza.  Yes, there have been small examples of that--amid hundreds of thousands of protesters expressing none of that.  Except the usual anti-Israel policy = anti-Semitism.

Typical top NYT headline today As Cease-Fire Holds, Gazans and Israelis Tally Damage.  Except, there's been so little damage in Israel--and the story, amazingly, can't even cite on example.   One side is pulling bodies out of rubble, those on other side go out to "beaches," host "barbeques,"  visit soldiers and "pick peppers." One Israeli there says,  "It's fun."  And civilian death toll 1020-3 so far.  And story makes clear near the top that we know Israel's only out to hit tunnels and Hamas hides weapons all over the place.  And closes with false hint that most of dead were armed militants.

Must-read New Yorker piece by a leading Israeli author on mood there now:  "It’s become clear during this operation that the right wing has lost its patience in all matters regarding that elusive term, 'freedom of speech.' In the past two weeks, we’ve seen right wingers beating left wingers with clubs, Facebook messages promising to send left-wing activists to the gas chambers, and denunciations of anyone whose opinion delays the military on its way to victory. It turns out that this bloody road we walk from operation to operation is not as cyclical as we may have once thought. This road is not a circle, it’s a downward spiral, leading to new lows, which, I’m sad to say, we’ll be unlucky enough to experience."  (h/t @BBedway)

Chris Guinness of UNWRA tweets:  "UN reports a rise child mortalities, miscarriages and premature births among pregnant women. Pity the women & children of Gaza...45,000 women pregnant women in #Gaza in need of maternity care and an estimated 5,000 of these displaced by the current conflict...Access to maternal health services in #Gaza increasingly limited by attacks near & on health facilities. Women paying inordinate price."  Women's organizations in U.S. largely silent.

Major piece at The Guardian on Gazans able to venture out finally amid 12-hour ceasefire--and shocked at the full extent of the damage (left).  Also:  death toll there has shot up again and topped 1,000 as 85 bodies are pulled from rubble.


At the nearby hospital, six patients and 33 medical staff had spent the night huddled in the X-ray department as the neighbourhood was shelled, said the director, Bassam Abu Warda. A tank shell had hit the second floor of the building, leaving a gaping hole, and the facade was peppered with holes from large-calibre bullets.

Two Red Crescent ambulances were hit in Beit Hanoun overnight, killing a medic and wounding three, one critically, according to the International Committee of the Red Cross. On Saturday, rescue workers pulled the scorched body of the medic from the wrecked vehicle, which had been hit about 200 metres from the hospital.

"Targeting ambulances, hospitals and medical workers is a serious violation of the law of war," said Jacques de Maio, head of the ICRC delegation for Israel and the occupied territories.

"...much more willing to criticize Italy than..."

I think you mean "Israel," no?

Typo where you have "Italy"? Thank you for your work in covering this story.

Isn't the Washington Post going a bit far in equating the suffering when it leads with "Palestinian and Israeli casualties are mounting at a pace that could surpass any other Israeli conflict in nearly a decade..."?