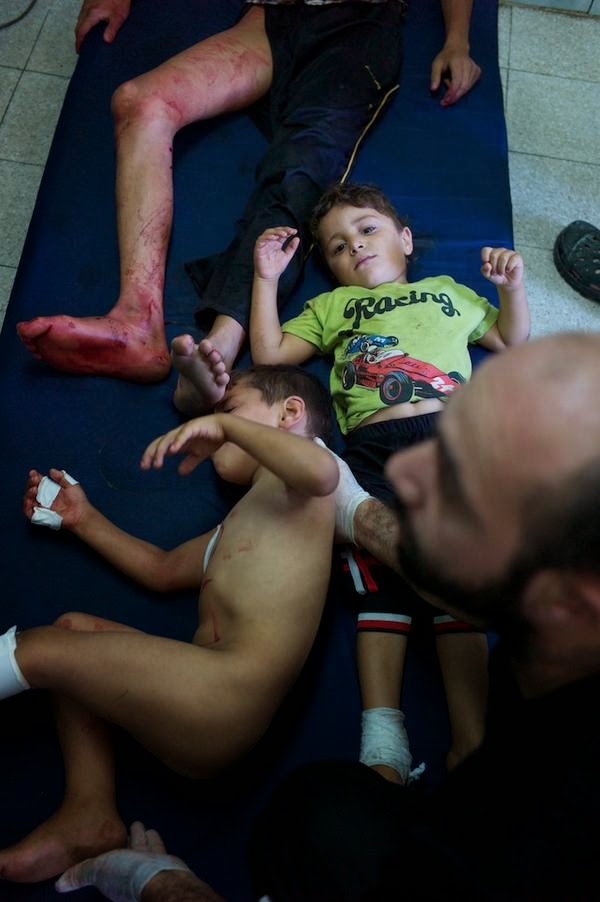 8:30 p.m. ET  The NYT continues to trumpet Israel claims that Hamas might have fired missiles that caused school massacre.  But Israel spokesmen continue to also come up with fallback explanations for why they fired on school.  NYT dutifully floats another in latest revision of their story--Israel now says "errant shells" may have come from a clash with Hamas nearby.  McClatchey, in surprise, follows same line, giving equal weight to evidence and logic that Israel "can't rule out" Hamas attack.   Seems pretty transparent--to most.  Such as Richard Engel from NBC who tweets:  "IDF suggests Hamas rocket/rockets hit school. it would mean five inaccurate rockets all hit a small location in rapid succession. likely?"

Engel also points out: "UNRWA says it formally conveyed its location to Israeli forces 12 times, including at 10:56AM tdy....UNRWA chief tells us agency was not given any warning before strikes on school."

4:15 p.m. ET Reporter from The Guardian with first on-the-scene analysis of who fired at school.  He concludes clearly: Israel (see NYT eagerly accepting Israel's claim that it might be Hamas).

Although missiles belonging to Hamas and other armed Palestinian groups in Gaza do sometimes fall short, there was no visible evidence of debris from broken Palestinian rockets in the school. The injuries and the number of fatalities were consistent with a powerful explosion that sent shrapnel tearing through the air, in some cases causing traumatic amputations.


The surrounding neighbourhood bore evidence of multiple Israeli attacks, including smoke from numerous artillery rounds and air strikes. One building was entirely engulfed by flames.

Earlier, updated from the top: Israel's ambassador to U.S. Ron Derner says at Christan convention in USA that his country should get the Nobel Peace Prize for the "unimaginable restraint" it has shown in waging latest war.

It would be laughable if it wasn't so tragic: IDF spokesman just claimed that, yes, they warned UN folks to get out of school in target period (which UN folks deny)--and says rocket fire coming from area--then  suggests school hit by misfired Hamas rockets.  What a coincidence. Of course, could be true.  In any case, Israel's claim has gotten NYT to shift from IDing Israel to saying source of attack unknown.  Some others in U.S. following suit though most abroad note Israel's claim but still name them, for now, as guilty party.

Al Jazeera reports 15 to 30 killed, 100 to 200 injured, today in UN school designated as "safe haven" and with no warning from Israelis. Update here.  Photo from hospital, left, via ITV reporter Dan Rivers.  UN says Israel given full info on school and knew it was used as shelter and with no military activity there.  AP story.  Awaiting NYT defense (see below).  Dan Rivers: "I will never forget the utter shock on these kids faces - they thought they were safe in a UN school."

@RichardEngel of NBC just tweeted:  "Ambulances under attack again tdy. Was in one that came under fire in shejaia market." And:  "UN school attacked in north gaza.. 13 at least killed. Bloody desks. Blood on ground. Terrified children."  And then: "Israeli ch 2: the government holding a special meeting to discuss the expansion of the operation and increasing the financial support."  Remember: much of money comes from USA.

William Booth of Wash Post at the UN school tweets: "At Beit Hanoun UNRWA school after Israeli shells: a scene of flight & panic: blood, bandages and sheep running through the halls."

Finally a straight-out defense of Israel slaughter of kids and other civilians--in a NYT news story.  No punches pulled in top story today.  Reads like what we used to call a "make-up" story after pushback.  Should have run as an op-ed.

One reason I've written about atomic bombings for over 30 years--killing kids rarely considered war crime.  Up to 50,000 children died in Hiroshima and Nagasaki and then U.S. suppressed much of evidence for decades.

Good to see Robert Mackey joining in with blog coverage at NYT.  His post last night covers Israeli attacks on journalists (while they've been welcomed in Gaza), including the now-famous on-air assault; and the state media there refusing to run add listing the names of Palestinian kids killed.   One of the banned ads here.

Jeremy Scahill calls coverage of this war worst ever, with no TV push back on Israeli leaders and failure to hit constant "war crimes" and massacres.

Powerful little post and photo by NBC's @AymanM from Gaza--survivor of bomb that took 8 members of his famly.

Meanwhile, Mainstream America can't figure out why our hard earned money via taxes are given out to places like Israel and Egypt.

War crimes against children? Jailing of journalists in Egypt.

There is not one Senator that opposes anything Israel does?

Hold on! Israel held back on ground operation, waiting to see if Hamas rockets would stop. Even after ground operation started, Israel went with the cease fire and Hamas ignored it. Even now Israel is supportive of cease fire proposals but Hamas won't let up. This only happened because Hamas are firing rockets at Israeli civilians and refuse to let up, knowing full well where it would lead. How come all the complaint at Israel yet not a word about how Hamas could easily have avoided all of it.

Would you be happier if Hamas rockets were more effective and Israel less well organised about protecting its people so that the death toll was more balanced? Do you need to see images of dead Israeli babies to even things up?

The only reason so many deaths in Gaza is that Hamas need them to happen, knowing how the Western and arab media will react. They want to put pressure on Israel to agree to a 10 truce (hudna) and opening up of borders so they can build up an arsenal without interference. Want to guess what happens after 10 years?

Cynical perhaps, but I've come to believe the turmoil in the Middle East is a complete a US foreign policy success. Our government is paying other countries for outcomes it finds acceptable. Weapons sales are up, so it can't be bad for those who fund our representatives.

And let's not kid ourselves, it is Israel that needs so many deaths if they are to keep control of the land and water they occupy.

And a cease fire proposal that both jailers of Gaza agree is a good deal for their prisoners? Really?

Death penalty for everything does not define a great nation or a humane people.