Thursday's Updates (From the Top) on Gaza-Israel Tragedy 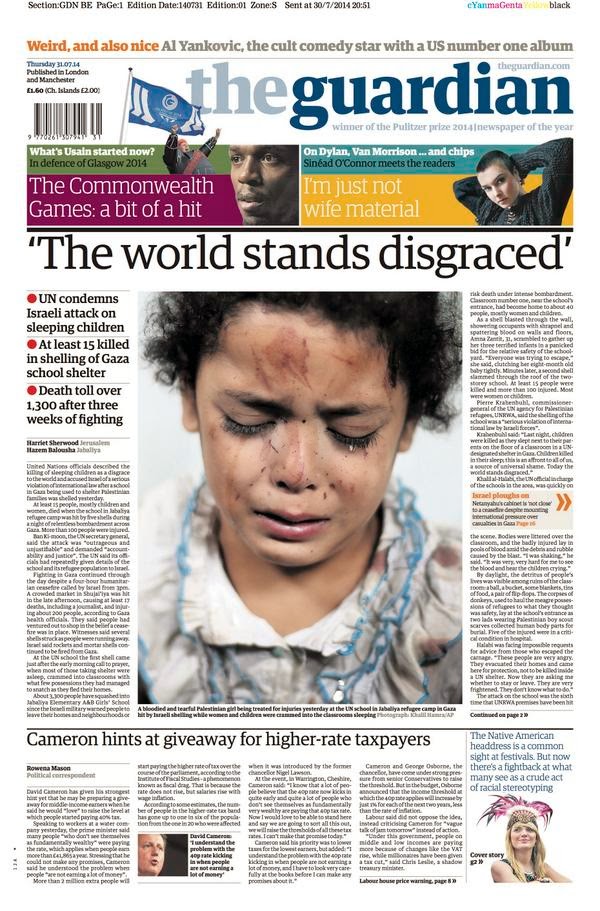 Friday update: See item at 11:00 below.  Patrick Connors, who has been providing tips here this week, wrote the Times to complain and amazingly got reply from their Standards desk that they had removed the video due to headline.  It came directly from Reuters and the Times agreed heading was wrong.  But it is still likely posted the same way at sites around the world.

11:25 p.m. Jay Rosen on AP deleting and changing that tweet the other day--you know the one that first claimed members of Congress were "falling over each other" to back Israel (too true), then simply said "many" backed Israel.  Analyzes why AP did it.


11:00 p.m. Where to begin with this new NYT video?  It seeks to balance the deadly Israeli attack on Gaza school two nights ago with  a rocket attack on an Israeli school--"Both Israeli, Hamas rockets hit schools"--
except that it turns out the rocket landed only near, not at,  the school and no one was hurt.  And the Gaza attack? The copy on the Times page mentions 30 "injured" and the narration of the video also talks only of "injured" (no mention of the many deaths).   h/t Patrick Connors

7:00 72-hour "humanitarian ceasefire" announced, as Israel and Hamas agree to UN/US plea.  One thing to watch:  Israel insists on taking "defensive" actions against tunnels which they could interpret rather broadly.  And Hamas always on edge.

BBC:  The strikes by Israel's military on UN buildings in Gaza "do not appear to be accidental", the UN human rights chief Navi Pillay has said.  Ms. Pillay also called for international law with "appropriate investigation, prosecution and punishment" to be applied to the incidents.

Another day, another pro-Israel resolution letter led by Sen. Barbara Boxer, this one to the UN protesting its alleged one-side inquiry into war crimes in Gaza/Israel, with 35 Senators on board already, including many top Dems:  Gillibrand, Wyden, Booker and on and on. Typical excerpt: "Over the past two weeks, Hamas has put Palestinians in danger, refused to adhere to multiple cease-fire agreements, and launched more than 2,000 rockets into Israel. What country could sit idly by without responding? Israel has a right to defend itself against these vicious attacks and has worked assiduously to minimize civilian casualties by warning Gaza residents of impending air strikes."

Israel spokeswoman Jodi Rudoren on CNN just now :  Many Israelis "just feel like nobody understands them....nobody outside of Israel really understands what they're going through." Once again: cites tunnels without mentioning not a single Israeli civilian has ever died because of them.

Chris Gunness of UNWRA explains to The Guardian why he broke down on camera in interview: “It was a live interview, and I just about got through it, just about held it together. But what really makes my heart burst is the suffering of children, and I was so moved by the appalling attack on the school in Jabaliya that I couldn’t control myself any longer.”

Greatest soccer midfielder for Palestine ever killed in his bed.  Took no part in politics.   Currently did sports on TV.

Great piece at AFP by reporter on Gaza's children and what she's witnessed in past two weeks.

Joe Scarborough, longtime major backer of Israel,  today: "This continued killing of women and children in a way that appears to be indiscriminate is asinine...The United States of America — we cannot be associated with this if this continues. This is so bad, not only for the Israeli people, but for us." (If you've lost Joe Scarborough...well, you probably still will never lose the U.S. Congress.)  In update at bottom of Politico piece he claims he's gotten major feedback, most of it "positive."  Doesn't seem to be saying he expressed himself poorly.

Netanyahu calls current actions just "first phase" of invasion, and calls up 16,000 more reserves.  Why?   Amira Hass at Haaretz:  "Based on the scale of the destruction in the evacuated areas, it looks like the army’s goal is not a temporary evacuation, but the creation of a permanent buffer zone devoid of any structure."

Update on death toll in Gaza:  1361 dead, of that over 315 childen, with 2300 kids injured.  No need to update Israeli civilian toll:  still one Bedouin, one Thai worker, one settler.

U.S. television journalism in a nutshell.  Charlie Rose last night had Israeli ambassador to U.S. Ron Derner on for a lengthy rant, including visions of, if need be, "wiping out" Gaza.  Derner then cited  3 UN schools where rockets were found and that UN schools in Gaza are "warehouses" for weapons.   Charlie awakes from his slumber to interject, "Some are not."  There are 245 UN schools in Gaza.

White House "condemns" latest UN massacre but can't bring itself to name or blame Israel.  Then makes sure to hit UN because a few missiles found in three schools.  It's despicable linkage especially since all of the missiles were found in abandoned schools--not ones where people are taking shelter.    State Dept. spokesman said we still don't know who bombed school--contrary to all evidence.  Also, U.S. has shipped new mortar rounds to replaces ones used today.

Last paragraphs of NYT columnist and Zionist Roger Cohen's latest quite good, if fellow Zionists will ponder it.  Alas, could be deaf ears syndrome.

Amnesty International:  Israel's attack on UN school last night "is a possible war crime and should be independently investigated....If the strike on this school was the result of Israeli artillery fire it would constitute an indiscriminate attack and a likely war crime. Artillery should never be used against targets in crowded civilian areas and its use in such a manner would never be considered a ‘surgical’ strike."  How this is different from so many other Israeli strikes is a bit beyond me, however.
Posted by Greg Mitchell at 8:47:00 AM

you guys has been quoting mainstream media reports which are obviously filtered. why not quote people who ARE there? like the UN workers?