Wednesday Updates (From the Top) on Gaza-Israel Tragedy 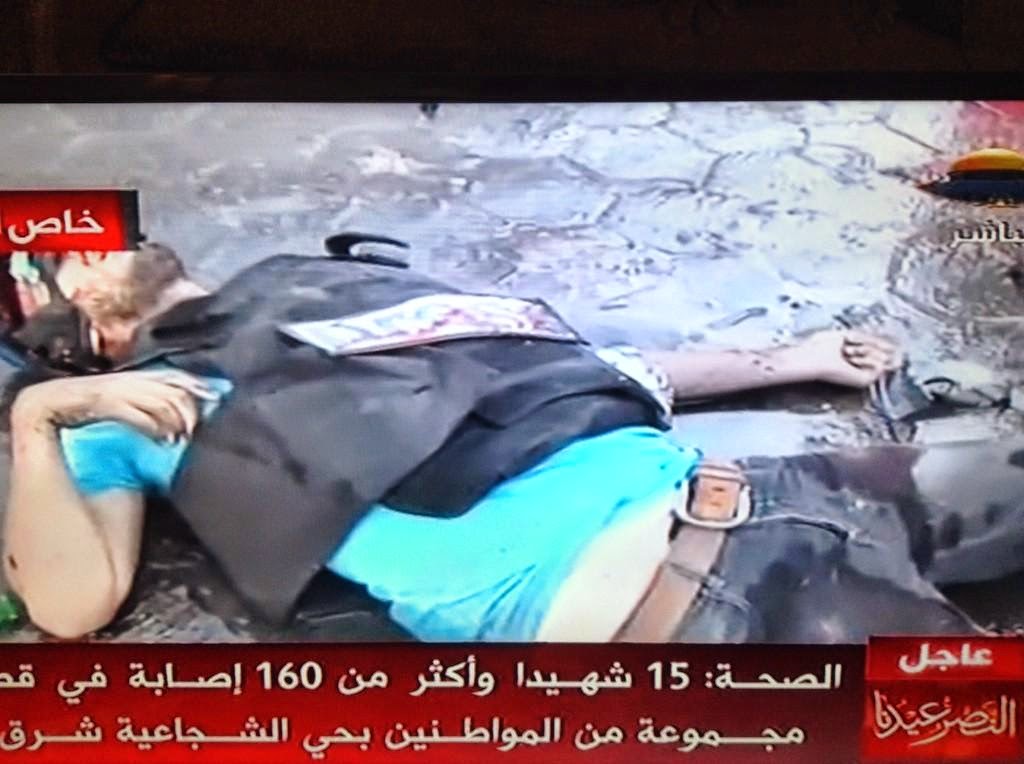 11:20  U.S. television journalism in a nutshell.  Charlie Rose just had Israeli ambassador to U.S. Ron Derner on for a lengthy rant, including visions of, if need be, "wiping out" Gaza.  Derner then does his song and dance about 3 UN schools where rockets were found and that UN schools in Gaza are "warehouses" for weapons.  And good old Charlie awakes from his slumber to interject, "Some are not."  There are 245 UN schools in Gaza.

9:30  White House "condemns" latest UN massacre but can't bring itself to name or blame Israel.  Then makes sure to hit UN because a few missiles found in three schools.  It's despicable linkage especially since all of the missiles were found in abandoned schools--not ones where people are taking shelter.    State Dept. spokesman today said still don't know who bombed school--contrary to all evidence.  Also, U.S. has shipped new mortar rounds to replaces ones used today (see below).

Last paragraphs of NYT columnist and Zionist Roger Cohen's latest quite good, if fellow Zionists will ponder it.  Alas, could be deaf ears syndrome.

No need to update Israeli civilian toll:  still one Bedouin, one Thai worker, one settler.

Amnesty International:  Israel's attack on UN school last night "is a possible war crime and should be independently investigated....If the strike on this school was the result of Israeli artillery fire it would constitute an indiscriminate attack and a likely war crime. Artillery should never be used against targets in crowded civilian areas and its use in such a manner would never be considered a ‘surgical’ strike."  How this is different from so many other Israeli strikes is a bit beyond me, however.

Bernie Sanders on carnage in Gaza:"That's not where my mind is right now."

4:40 p.m. ET  NYT's Jodi Rudoren has posted her new Facebook cover page photo--she's in that tunnel on her IDF tour.  Actually this is more perfect that she imagines.  See some of the comments on it there.  Someone wants her in an IDF jeep, and so on.   h/t Patrick Connors.

4:00 p.m. ET  If you can handle it: death of journalist in Gaza captured today in incredible, horrific, video.

Silence of Arab states on carnage, like the U.S.,  "is deafening."

Richard Engel of NBC just tweeted:  "Gaza city was poor & barely functioning even before war. Now struggling to stay out of humanitarian crisis."  Stay out of?

Friends and colleagues ID dead journo as Rami Rayan (above), a young photographer.

UNWRA spokesman on earlier school attack:  "Children killed in their sleep.   This is an affront to all of us, a source of universal shame."

8 days since fine NYT public ed posted on Gaza and Israel--and back then it was mainly on criticism of paper being too anti-Israel.

Sunjeev Bery of Amnesty International in series of tweets raises something I haven't:  NYT in its daily summary graphic has always listed number of Hamas rockets fired--but does not include number, or tons, of Israeli munitions fired.  Just targets hit. Or, as far as we've seen, any accounting in a story of gross amount fired or dropped.  (h/t Patrick Connors)

NYT's reporter in Gaza, Ben Hubbard, manages to state clearly today that it was Israel that bombed the power station--sharing a byline with Jodi Rudoren he did, or could, not.

9:30 a.m.  ET The usual laughable claims by IDF spokesman on latest massacre (below):  "Lt. Col. Peter Lerner of the Israeli military said no United Nations facility had been targeted during the operation. A military spokeswoman said Palestinian militants had 'opened fire at Israeli soldiers from the vicinity' of the school in the Jabaliya refugee camp Wednesday morning, and that the Israeli troops 'responded by firing toward the origins of the fire.'”

Note NYT headline: "Israeli Shells Said to Hit School."  As if any doubt.  Israel not even claiming--so far--that they were misfired Hamas rockets.  Fox News headline has "Palestinians Claim." But on the brighter side: 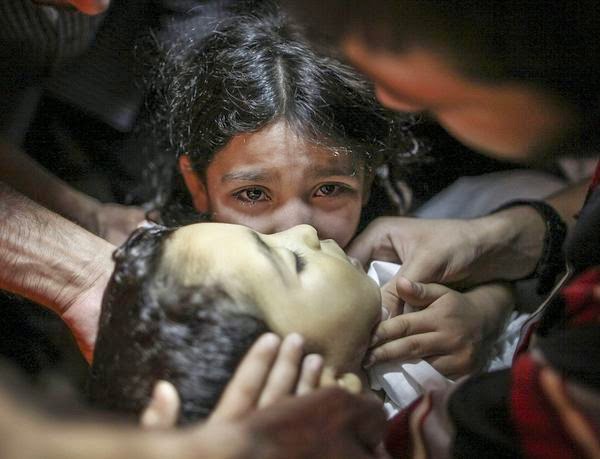 8:00 a.m. ET  Well, here we go again.  Another massacre from the air at Gaza school and shelter, at least 15 dead (some say 23 or more),  and again Israel  "looking into it"  etc.   Photo of one victim at left.  Richard Engel just tweeted, "Witnesses tell @NBCNews there were no militants in school when it was hit, UN says it was struck by israeli artillery."  Gazans have taken shrapnel as evidence.  NYT, of course, lets it go that "Palestinians said" it was Israeli shelling.  UN spokesman:  3300 at school at the time, had been told by Israel to evacuate to that area, and UN gave them coordinates. Another strike killed 10 in one family.  Five mosques hit and possibly two more shelters.

Amazing interview with David Frum's clownish source for his debunked claim of NYT and Reuters faking photos from Gaza.

If you missed  my new lengthy piece on the Hamas "terror tunnels" as main pretext for continuing slaughter, and promotion of this by U.S. media.  How often have they been used for "terror" in the past? Note: Not a single Israeli civilian ever killed by a militant from a tunnel.
Posted by Greg Mitchell at 10:30:00 AM

Again the attacks are going in Gaza.This time total 61 killed and 450 members wounded.We don't know why the top countries like U.S.A supporting this kind of attacks.Many people are dying in this attacks.Recent attack which killed small children they slept next to their parents.Pray that these attacks going to stop and people get relief.