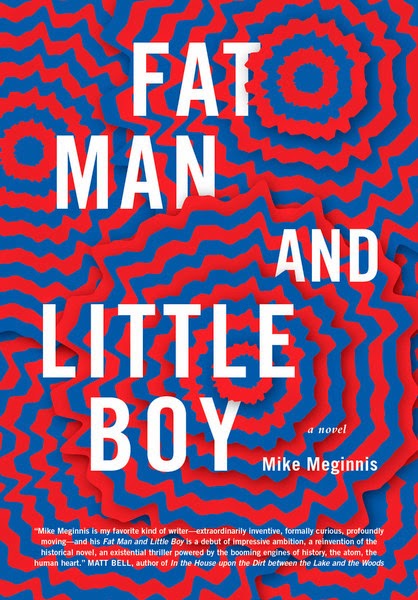 Once again this year--as I've done for thirty years--I've written or revised and posted numerous pieces related to the atomic bombings of Japan in August 1945.  As many of you know, I have also written three books on the subject (find them over on the right rail of this blog), including the acclaimed and best-selling Hiroshima in America, co-authored by the great Robert Jay Lifton. But now I'd like to highlight a (yes) quirky new novel.

It's titled Fat Man and Little Boy (also the title of a not-bad Roland Joffe film many years ago), which of course refers to the names of the bombs dropped on Hiroshima and Nagasaki.   Here's how the author, Mike Meginnis, describes his inspiration:  As a student when he learned of the names "it made me unspeakably sad. I didn’t understand why anyone would choose to anthropomorphize such terrible weapons. To give them even a measure of humanity struck me as cruel to the bombs themselves. It gave them a ghost of agency, a fictional consciousness. It’s not much, but nobody needed to do that. I began to think about the sort of people Fat Man and Little Boy would be."

Huh? Well, the publisher, Black Balloon, describes it this way:  "In this powerful debut novel, the atomic bombs dropped on Japan are personified, born on impact as human beings—as a Fat Man and a Little Boy. Their small measure of humanity is a cruelty the brother bombs must suffer. Given life from death, they travel west from Japan to France and later to America. Their journey is one of surreal and unsettling discovery, and author Mike Meginnis transforms these symbols of mass destruction into beacons of longing and hope."

Well, I'll be curious to read how (or if) he pulls off--and his message on the actual use of the bombs (in their own birth/death)  which, after all, killed 200,000 people, the vast majority civilians.   You can pre-order now at link above.
Posted by Greg Mitchell at 12:58:00 PM

Yes, they were indeed "beacons of longing and hope" if they were our bombs. Propaganda just like this bit of funny from the NYT today about our proxy shelling of civilians: "Life in Luhansk, Ukraine, is tough, but far from catastrophic. The only relief most people seek is from the shelling, which goes on night and day".

To bring this logic closer to home, how about 'Life in Ferguson, Missouri, is tough, but far from catastrophic. The only relief most people seek is from the police shootings, which go on night and day.'