Near the end of August in 1934, in the depths of The Depression, one of the world's most famous novelists and socialists, Upton Sinclair, swept the Democratic primary for governor of California.  Leading one of America's greatest grassroots movements,  EPIC (End Poverty in California), he appeared headed for victory in November.  To derail him,  Republicans and big business Democrats created the most extreme dirty tricks seen in the U.S. -- and also went out and invented the modern political campaign, for the first time turning a major race over to a new breed of political consultants and "spin doctors."  Hollywood took its first all-out plunge into politics (and it's never been the same).   And the saintly Irving Thalberg ordered the first "attack ads" for the screen, precursor of today's TV-based campaigns.  The amazing, often rollicking tale, was told in full for the first time in my book, The Campaign of the Century, winner of the Goldsmith Book Prize.  Here's an excerpt for this day 80 years ago. 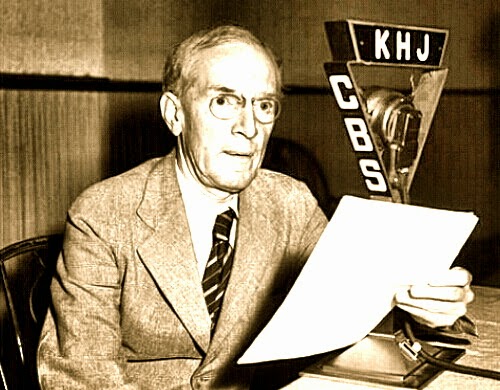 Logs crackled in the fireplace. The President occupied a large leather
chair in his library; a block of documents a foot high rested on the table
before him. "You see how far behind I am in my work," Franklin
Roosevelt said.

"Actually," observed Upton Sinclair, sitting directly across from him,
"we all marvel that you're so far ahead with it."

"I cannot go any faster than the people will let me," Roosevelt said.

"The people of my state," Sinclair responded eagerly, "will soon let
you know what they are thinking!"

A servant brought two glasses of iced tea, then exited, leaving the two
men alone. The President had rejected Jefty O'Connor's idea of having
someone monitor the meeting. Since there were only two parties to this
discussion, Roosevelt could afford to trust Sinclair. His visitor might
actually keep his vow of secrecy; and if he didn't, FDR could always
say that Sinclair recalled a particular statement or detail wrong. Whom
would people believe: Franklin Roosevelt or Upton Sinclair? There
would be no transcript, no third party, for Sinclair to appeal to.

Still, it wouldn't hurt to flatter Sinclair. The President was not above
it—in fact, he was famous for it—and this fellow was known to take
flattery to heart. FDR told Sinclair that he admired his work. When
Franklin was a child, his mother used to read “The Jungle” to him at the
breakfast table.

"And it spoiled your lamb chops?" Sinclair offered.

"Yes," the President said, throwing his great head back in a hearty
laugh.

The story, of course, was suspect, since Roosevelt, at the time “The
Jungle” was published, was married and a student at Columbia Law
School.

It was time to get down to business. Sinclair was determined not to
settle for vintage Roosevelt. He had come to Hyde Park for political
effect, but now that he was here, he discovered he was intensely curious
about FDR. Was he a wise man, learning by his own blunders, or a blind
man groping his way? He wanted to know how much the President
really knew about conditions in California—and how familiar he was
with the EPIC campaign.

Soon the candidate discovered that the President had either read “I,
Governor” or had been well briefed on the EPIC plan. They discussed
EPIC's effect on unemployment, capital investment, and inflation. Sin-
clair finally found a detail Roosevelt seemed unfamiliar with—the so-
called EPIC tax. Companies or utilities strapped for cash could pay their
state taxes in the form of goods and services. This would provide materi-
als (such as lumber and steel), as well as heat and electricity, for public-
works projects. Roosevelt leapt right in, as if, Sinclair observed,
firecrackers were going off in his head.

"Yes, it could be that way," he said, "but what if you did this ..."
Roosevelt asked questions, and before Sinclair could respond, FDR
took the answers right out of his mouth. This was the President's own
mind working, Sinclair discerned; he wasn't following a script.
Sinclair started off in another direction.

"Yes, that's important," FDR said, cutting him off. "I was just talking to
someone about it yesterday."

Finally the old muckraker laughed. "I see you don't need me," Sin-
clair said. He would have understood if Roosevelt had responded to any
particular point by saying, "I couldn't support that," or "You're right,
but I can't say so right now." But the President never fell back on these
staples of political obfuscation. If Sinclair was causing FDR any embar-
rassment, the President was doing a good job of concealing it.

This seemed an appropriate moment for Sinclair to urge his new
friend to ignore reports about a third-party EPIC campaign for presi-
dent in 1936. Roosevelt cheerfully informed his guest that he was itching
to get back to writing and suggested that it might not be a bad idea for
them to trade jobs for a while.

The two men had been scheduled to meet for sixty minutes, and the
hour had long passed. It was now early evening, and the sky outside was
darkening. The butler brought another tray of iced tea. Sinclair didn't
know the proper etiquette. Should he rise, apologize for keeping the
President so long, and leave? Or wait for FDR to terminate the conver-
sation? The longer the discussion, the better it would appear for Sinclair;
afterward he could use it as a yardstick of presidential interest and
support. The meeting continued.

After a lengthy discussion of production for use, the President star-
tled Sinclair with a revelation. "My advisers tell me that I have to talk
to the people again over the radio and explain to them what I am doing,"
he said. "I am going to give that talk in two sections." The first speech
would concern "general problems"; the second, unemployment. FDR
seemed to suggest that he would deliver a fireside chat endorsing pro-
duction for use sometime around October twenty-fifth—two weeks
before Election Day.

Sinclair could hardly believe his ears. Ratification of his most impor-
tant platform plank—the whole basis of the EPIC plan—would be
almost as valuable as an endorsement of his candidacy.

"If you will do that, Mr. President," Sinclair said, barely able to
contain his gratitude, "it will elect me."

(Note:   FDR, under pressure from aides, never did endorse and ultimately worked out a deal with his opponent.)
Posted by Greg Mitchell at 10:24:00 AM

Incredible weblog! Good, obvious as well as well crafted. Many thanks with regard to discussing!