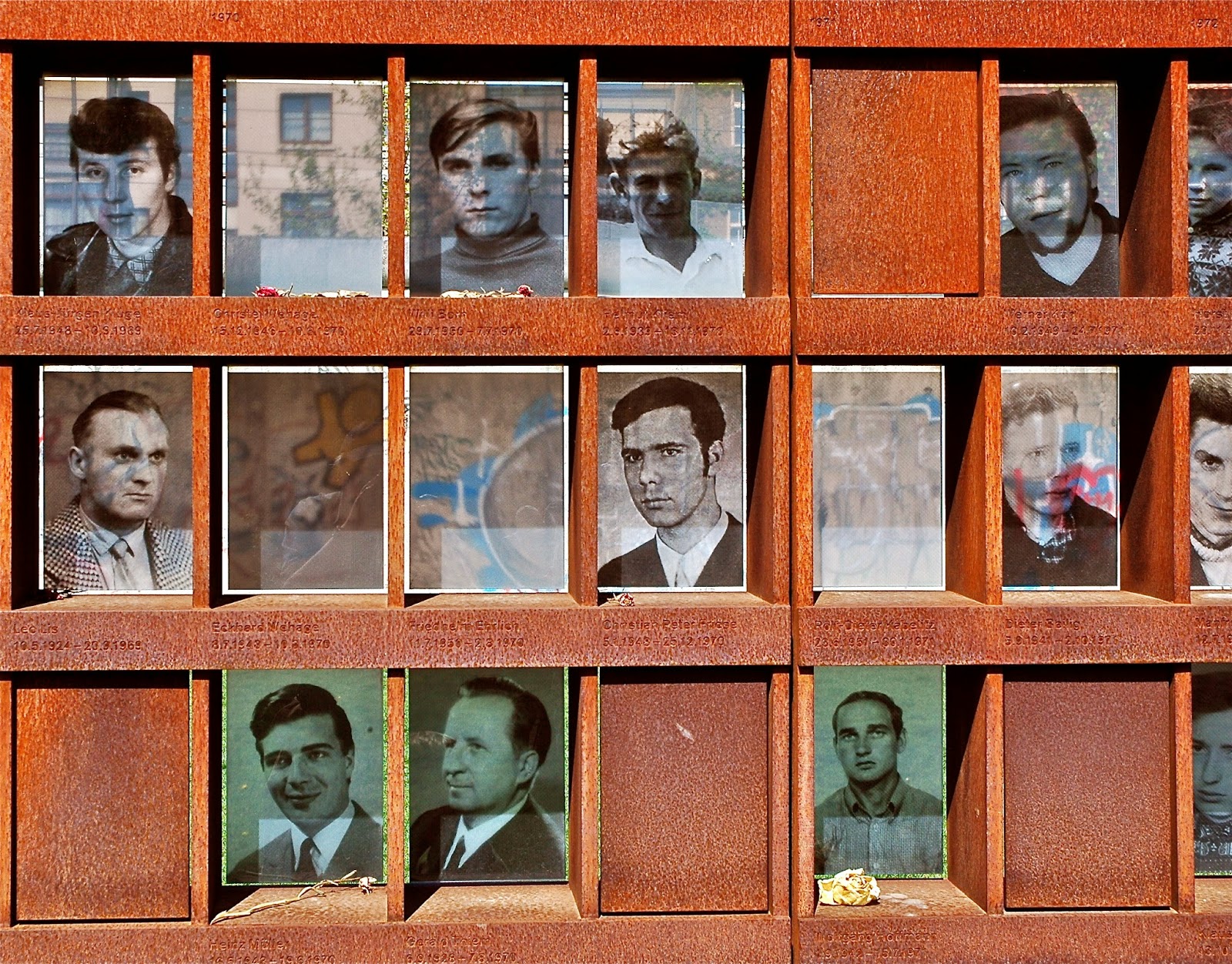 January update:  Trip to Berlin now set--so very light posting for the next 10 days--and amazingly have arranged interviews with all four key tunnelers who took part in the "CBS" and "NBC" tunnels, plus the first woman who escaped (with baby) and much more...

And further:  Signed contract this week so, so as the tunnelers no doubt said at some point, there's no turning back now!  My risks a good deal lighter, however.   My photo at left is from memorial at Bernauer Strasse with photos of more than 100 who lost their lives at the Wall--with the remains of the Wall visible behind their pictures.

Further update:  Thrilled to be working closely with my daughter on this, as she and husband already hard at work as (paid) researchers in Berlin.  My next trip there: late-January.  And I hear tremendous interest from A-list screenwriters on movie.

Update Wednesday:  And now another wild week, since we did things backwards, my book proposal sold to the movies first, for Paul Greengrass film--and only now comes the remarkably major book deal.  Here's the Associated Press story now, with the great Rachel Klayman at Crown/Random
House to edit.

Friday: Big news today for yours truly, as my proposal for my next book The Tunnels was purchased by great upstart company FilmNation for a major film directed by one of my film heroes, Paul Greengrass.  Just up at Variety.

Quite flattered by interest over past 10 days from several leading studios and A-list directors but very happy to be with Greengrass--I was one of early boosters of his Bloody Sunday back in 2002, and since--and producer Mark Gordon (who did Saving Private Ryan and so many others).  Amazing story of  young folks in the West who at unfathomable risk dug tunnels under the Berlin Wall in 1962 to bring out family and lovers and others--and now a wonderful chance to tell it on the page and on the screen.  The Variety description includes the key angle of CBS and NBC financing two key tunnels--but omits what happened then:  JFK at the White House trying to suppress the two network specials as nuclear tensions rose.

Special thanks to Brian Siberell and Michelle Weiner at CAA and my literary agent Gary Morris at the David Black Agency.  Yowza.  And great chance to work with my daughter, who lives in Berlin about a mile from the former path of the Wall.   My photo above of some of those who died trying to get over or under or around the Wall, at the Memorial on Bernauer Strausse (remnant of the Wall behind them).
Posted by Greg Mitchell at 7:30:00 AM

Do a cameo, Greg. That wold be awesome.