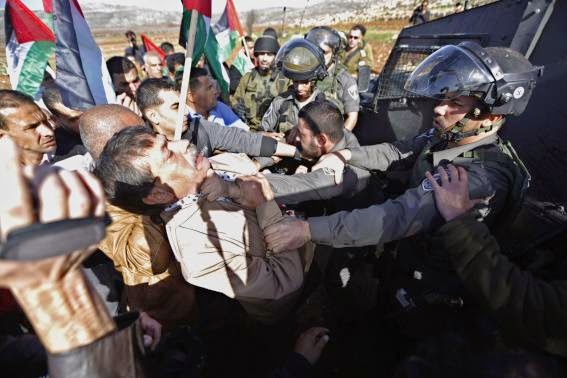 Wed.  Fortunately, a Reuters reporter there to witness--and even take, or submit, photo of attack. And another photo of aftermath.

Wed. Update:  Long-discredited NYT bureau, of course, rushes to the defense, and you may see echoes of the Eric Garner case.   The Times reporters, who often seem to be embedded in the IDF,  claim  Israeli medics tried to help him but for some reason the Palestinians rushed him to a clinic!--and, by the way, it was partly the man's fault because he had high pressure and suffered from diabetes.  And maybe he was just unlucky victim of tear gas, so forget about being hit with rifle butt and choked.  And to balance the evidence of non-violent protest we must learn that the Israeli military described the protesters as “rioters” and said its forces “halted the progress of the rioters into the civilian community of Adei Ad using riot dispersal means.”

Even the headline--which ran for hours. and later changed--was revealing:  Minister Dies During Protest.  You know, to the casual reader, maybe just had a heart attack, or died of old age, or was struck by a car, or hit by a Hamas rocket.

Video of the encounter.  Next we will have other Israeli defenders complaining to the Times that they ran a photo of the victim getting manhandled without running a second photo of the protesters screaming and threatening--and the public editor will say that, as usual on this subject, the paper is doing its best when attacked by both sides. In fact, the Times did carry such a photo showing menacing rioters today with its story, until swapping it out for the attack on the minister.

CNN tops even the NYT, which is never easy on this subject, claiming, "There were varying reports of exactly how Abu Ein died, including what role -- if any -- Israeli authorities played in it."  If any!