Yesterday in my annual series the highlight was the first nuclear test, at Trinity, on that date 76 years ago.  The following day, in Potsdam, Truman met Stalin for the first time, and had a new bounce in his step after receiving word of the positive test. 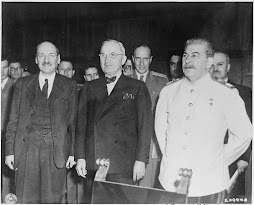 Still, he had to insist that the Soviets keep their promise to enter the war by mid-August for he knew, as he wrote in his diary at Potsdam, that would mean "fini Japs" when that occurred--even without use of the atomic bomb.  So Truman recognized, in real time, the crucial and possibly war-ending importance of the Soviet move--even if many historians and most in media have ignored or underplayed that since.  (See my slightly deeper analysis here.)

As it would turn out, he decided not to wait for Stalin but chose to use the bomb first (and then a second time even as the Soviets kept their promise and declared war on Japan).

Also today Gen. Leslie Groves, who managed the Manhattan effort, sent a long and detailed memo to Secretary of War Stimson on the Trinity test, which included eyewitness accounts by scientists and what would become a decades-long theme: downplaying the negative effects of radiation.  "It was followed and monitored by medical doctors and scientists with instruments to check its radioactive effects. While here and there the activity on the ground was fairly high, at no place did it reach a concentration which required evacuation of the population."

He did have to admit:  "Radioactive material in small quantities was located as much as 120 miles away. The measurements are being continued in order to have adequate data with which to protect the Government's interests in case of future claims."

My third book on this subject was published last year:   The Beginning or the End:  How Hollywood--and America--Learned to Stop Worrying and Love the Bomb.
Posted by Greg Mitchell at 11:30:00 AM