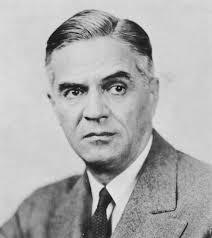 Once again this year I have launched by daily "Countdown to Hiroshima," covering events on each particular date leading up to the atomic attacks on Japan in August, 1945.  Below on this blog you can see many related posts.   Yesterday, of course, marked the anniversary of the first test at Trinity.  My third book on this subject has just been published:   The Beginning or the End:  How Hollywood--and America--Learned to Stop Worrying and Love the Bomb.

He was Under Secretary of the Navy and also a member of the Interim Committee, which had advised Truman in June that he should approve the use of the bomb against Japanese cities as soon as it was tested (which would come on July 16, 1945) and ready.  Bard sent Secretary of War  the following memo and also may have met with  Truman to discuss it (there is some debate about this).   He remained convinced until the end of his life that Truman should have followed his advice. In fact, many historians believe that he is correct.  His three-angled proposal included warning the Japanese that the Soviets would likely declare war against them soon (which they did, just after Hiroshima); and to offer assurances that they could keep their emperor as a symbolic leader (which we okayed but only have we got a chance to use two of the new weapons).


Ever since I have been in touch with this program I have had a feeling that before the bomb is actually used against Japan that Japan should have some preliminary warning for say two or three days in advance of use. The position of the United States as a great humanitarian nation and the fair play attitude of our people generally is responsible in the main for this feeling.

During recent weeks I have also had the feeling very definitely that the Japanese government may be searching for some opportunity which they could use as a medium of surrender. Following the three-power conference emissaries from this country could contact representatives from Japan somewhere on the China Coast and make representations with regard to Russia's position and at the same time give them some information regarding the proposed use of atomic power, together with whatever assurances the President might care to make with regard to the Emperor of Japan and the treatment of the Japanese nation following unconditional surrender. It seems quite possible to me that this presents the opportunity which the Japanese are looking for.

I don't see that we have anything in particular to lose in following such a program. The stakes are so tremendous that it is my opinion very real consideration should be given to some plan of this kind. I do not believe under present circumstances existing that there is anyone in this country whose evaluation of the chances of the success of such a program is worth a great deal. The only way to find out is to try it out.