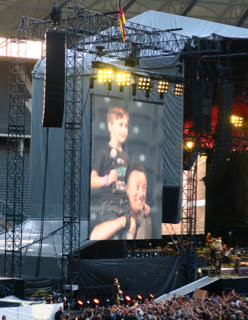 It's his birthday, and his new memoir is out any second, and now amid all the new attention, Bruce Springsteen (who some though might sit out this election) has instead slammed Trump and backed Hillary.   Rolling Stone released a teaser for its upcomig cover story, in which Bruce makes his "moron" comment and more.

“The republic is under siege by a moron,” Springsteen told Stone in its teaser published Friday.

“The whole thing is tragic,” he said re: Trump’s campaign. “Without overstating it, it’s a tragedy for our democracy. When you start talking about elections being rigged, you’re pushing people beyond democratic governance. And it’s a very, very dangerous thing to do. Once you let those genies out of the bottle, they don’t go back in so easy, if they go back in at all.”

Springsteen  supports Democratic nominee Hillary Clinton.  “I like Hillary,” he said. “I think she would be a very, very good president.”

My recent photo of Bruce in Berlin above.
Posted by Greg Mitchell at 3:42:00 PM