Baghdad Bob and the Spicer of Life 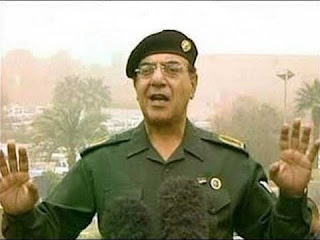 After his bold face lies of the weekend, new Trump press secretary Sean Spicer is being compared to none other than the immortal "Baghdad Bob."

Baghdad Bob, of course, was Saddam Hussein’s minister of information, later immortalized on t-shirts, Web sites, and even a DVD for his optimistic, if fanciful, statements about Iraq’s triumph over the American infidels, right up to the point his boss left the building. Baghdad Bob somehow survived and later worked as an Arab TV commentator, sans trademark beret.Here are a few Baghdad Bob classics from the spring of 2003. See if you can imagine them coming out of the mouth of Spicer, KellyAnne or the Donald speaking to the press today.*****“Be assured: Baghdad is safe, protected.”

“The American press is all about lies! All they tell is lies, lies, and more lies!”“They think that by killing civilians and trying to distort the feelings of the people they will win.”“We are in control, they are not in control of anything, they don’t even control themselves!”“The battle is very fierce and God will make us victorious.”“Those are not Iraqis at all. Where did they bring them from?”“No, I am not scared, and neither should you be.”“I blame Al-Jazeera.”“I would like to clarify a simple fact here: How can you lay siege to a whole country? Who is really under siege now?”“We’re giving them a real lesson today. Heavy doesn’t accurately describe the level of casualties we have inflicted.”“I can assure you that those villains will recognize in the future how they are pretending things which have never taken place.”“They are becoming hysterical. This is the result of frustration.”“I speak better English than Bush.”“Just look carefully, I only want you to look carefully. Do not repeat the lies of liars. Do not become like them.”“The United Nations … it is all their fault.”“This is unbiased: They are retreating on all fronts. Their effort is a subject of laughter throughout the world.”“The force that was near the airport, this force was destroyed.”“They are achieving nothing. Our estimates are that none of them will come out alive unless they surrender to us quickly.”“They hold no place in Iraq. This is an illusion.”“My information came from authentic sources. Many authentic sources.” “Once again, I blame al-Jazeera. Please, make sure of what you say and do not play such a role.”“I will only answer reasonable questions.”“These cowards have no morals. They have no shame about lying.”“You can go and visit those places. Everything is okay. They are not in Najaf. They are nowhere. They are on the moon.”“My feelings – as usual – we will slaughter them all.”“We are in control. They are in a state of hysteria. Losers, they think that by killing civilians and trying to distort the feelings of the people they will win. I think they will not win, those bastards.”“Rumsfeld, he needs to be hit on the head.”
Posted by Greg Mitchell at 10:35:00 AM