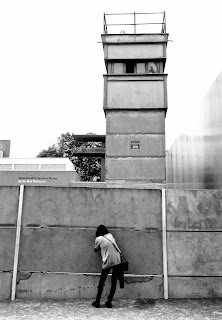 In my new book "The Tunnels," on escapes under the Berlin Wall (click on cover at right for more), I detail some of the most dramatic murders at the barrier in the early 1960s and beyond:  escapees, diggers, and guards alike.  I also note that there have been conflicting estimates of how many Germans were killed at the Wall, based on strict or loose accounting (some counts, for example, include a large number who committed suicide or died or heart attacks and other ailments while contemplating or attempting escapes).

Now a new study, released today, takes a new "strict" approach, and places the number at  327,  more than double the previous "verified" total.  (My photo at left.)  Just one detail:


The 327 victims came from both East and West Germany, and the vast majority (80 percent) were younger than 35 years old. The youngest victim was six-month-old Emanuel Holzhauer, who died of asphyxiation next to his parents inside the trunk of a car as they were being smuggled into the West from the GDR (East Germany).