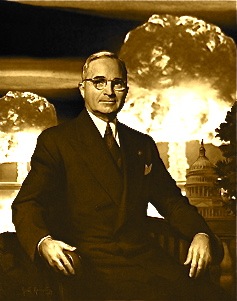 Each summer I count down the days to the atomic bombing of Japan (August 6 and August 9, 1945),  marking events from the same day in 1945.  I've written  three books on the subject:  Hiroshima in America (with Robert Jay Lifton),  Atomic Cover-Up (on the decades-long suppression of shocking film shot in the atomic cities by the U.S. military),  and Hollywood Bomb  (the wild story of how an MGM 1947 drama was censored by the military and Truman himself).

--Secretary of War Stimson sends semi-final draft of statement for Truman to read when first bomb used and he has to explain its use, and the entire bomb project, to the U.S. and the world, with this cover note: "Attached are two copies of the revised statement which has been prepared for release by you as soon as the new weapon is used. This is the statement about which I cabled you last night.  The reason for the haste is that I was informed only yesterday that, weather permitting, it is likely that the weapon will be used as early as August 1st, Pacific Ocean Time, which as you know is a good many hours ahead of Washington time."