Ayn Rand and the Bomb 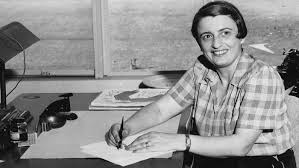 There's  great deal in my upcoming book on Ayn Rand's wild adventures and views in penning a competing (vs. MGM) 1946 atomic bomb film for Hal Wallis at Paramount.   Yes, it is little-known today that she wrote several screenplays in that period, mainly for Wallis, including one for an Oscar-nominated film titled Love Letters (her middling script did not earn many plaudits).  The Fountainhead had sold to the movies and while the movie would take years to develop it did send the book to the bestsellers list and even inspired a weekly comic strip.

Her A-bomb script was titled Top Secret, wild and awful and fully reflecting her world views.   She even interviewed J. Robert Oppenheimer for it, twice, and later based a key character in Atlas Shrugged on him.   Ultimately, Wallis sold out to Louis B. Mayer, which Rand hated.

Here's a relevant blurb for The Beginning or the End book coming in July:   "A story of dishy Hollywood doings but with atomic bombs and a screenplay by Ayn Rand—what more could a reader ask for?" -- Richard Rhodes, author of The Making of the Atomic Bomb, winner of the Pulitzer Prize and National Book Award.
Posted by Greg Mitchell at 6:10:00 PM