Eisenhower and the "Unnecessary" Bomb 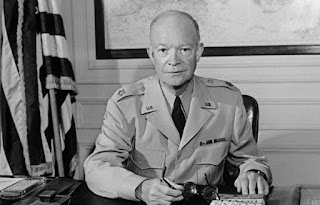 Now a post focusing on World War II hero Gen. Dwight D. Eisenhower, and another brief excerpt below from my new book The Beginning or the End book.

Eisenhower is the only U.S. president who has ever publicly disputed the decision to drop the atomic bombs over Japan, and he did so on at least two occasions, in print, years apart. His view--and that of other military leaders such as Gen. Douglas MacArthur and Admiral William Leahy (Truman's military chief of staff)--has proved troubling for those who insist that the only people who raise questions about the use of the bomb are "revisionist historians," anti-war critics or in any case were not alive at the time and never served in the military.   Still, this did not stop him from ordering a massive increase in the U.S. nuclear stockpile--and bomb testing--during the 1950s as the arms race with the Soviets raged.

Note:  Barack Obama much later became the first president to send a U.S. ambassador to Japan to the official Hiroshima memorial ceremony, and then became the first to attend the ceremony himself, for which he was roundly criticized by the right.

From the book:
*
The one president who disputed the Hiroshima decision did so both before and after residing in the White House. Gen. Dwight D. Eisenhower first made his views public in his 1948 memoir, "Crusade in Europe," asserting that he "disliked seeing the United States take the lead in introducing into war something as horrible and destructive as this new weapon."

Fifteen years later, in a second memoir, he charged that "Japan was already defeated and . . . dropping the bomb was completely unnecessary." Ike firmly believed "We shouldn't have hit them with that awful thing." In fact, he said, he had told Secretary of War Stimson much the same--use of the bomb was "no longer mandatory as a measure to save American lives"--in the weeks leading up to the dropping of the bomb.

When Stimson acted "perturbed," Eisenhower began to be overcome by "depression."