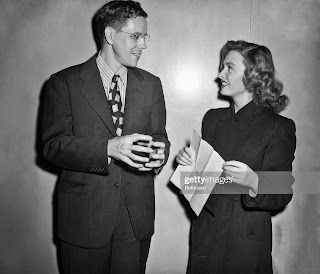 Lashing out again at reporters,  President Trump invoked the name of a former movie and TV actress to denounce one female journalist as "no Donna Reed."  This was meant to charge that she was no polite, classy, woman.   This image no doubt came to Trump via the Reed of her popular 1960s TV series, or from It's a Wonderful Life (while ignoring the "hostess" bar girl in From Here to Eternity, her Oscar-winning role).

It also does not reflect the Donna Reed featured in my upcoming book, The Beginning or the End.  She opens the book, in fact, as I recount how in 1945 she inspired the first Hollywood drama about the creation and use of the atomic bomb, from MGM.    She received a letter from her old high school chem teacher (see photo), now a Manhattan Project scientist, begging her to get her studio to make a big budget epic as a warning to the world, to reflect the rising fears of his colleagues about the global dangers of building more and bigger nuclear weapons.  Indeed, thanks to Reed, MGM would soon embark on this project and urgent message--both to be soon eviscerated by the demands from the Pentagon and the White House (Truman even got the actor playing him fired).  Well, that's told in rather shocking detail in the book.

Yes, Reed later became a loyal Republican (though those were the days when moderate or even liberal GOPers existed) but in the late-1960s, as the book relates, she became an anti-Vietnam activist and a leader with a prominent women's group--another Mother for Peace, famous for its War is not healthy for children and other living things poster)--and then took on nuclear power in the state before her unfortunate early death from cancer.   Perhaps we should thank Trump for raising her name after all.
Posted by Greg Mitchell at 9:20:00 AM