Another Death at Los Alamos

I've been posting brief excerpts from my book, The Beginning or the End,  just published,  some of which go far beyond the main subject--the perversion of the original vision for the MGM drama on the bomb due to orders from the White House and military. Here, still in 1946, I explore the death of a second scientist at Los Alamos, on May 30 of that year.  The earlier Daghlian accident had been covered up by the government and later attributed to "burns."
*
Less than a year after Harry Daghlian died after being exposed to radiation (photo below), Los Alamos witnessed a second fatal accident during a criticality experiment gone wrong. This was the brilliant Canadian native Louis Slotin, age thirty-five, who had helped arm the Hiroshima bomb and then the core slated to be used in the first Bikini blast, which he had planned to witness. 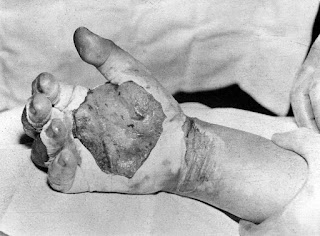 Enrico Fermi had warned Slotin months earlier that if he continued his risky criticality experiments--known as "tickling the tiger's tail"--he would be dead within a year. Unlike the solo Daghlian accident, this time eight Los Alamos personnel were exposed to the radiation, with Slotin getting far the worst of it. As Slotin lingered near-death for days, the government planned to avoid citing radiation as the culprit in any public statements--just as it had done after the Daghlian tragedy. Then his friend, the physicist Philip Morrison (who had witnessed even worse in Hiroshima), insisted on an honest reckoning.

In The Beginning or the End, Matt Cochran would miraculously die within a day, while Slotin would experience nine days of suffering; the others exposed would survive. When his passing was announced, Slotin was commonly referred to as "the first peacetime victim" of radiation from the bomb project. To balance the horrors of what nuclear accidents might mean for the future, officials played up the "hero" angle--how Slotin had maybe saved the others by sacrificing himself, reaching in and separating components to halt the runaway atoms. General Groves had written a note to him before he died hailing his "heroic actions" and dispatched a military plane to bring his parents to his bedside.

The Time headline called him "Hero of Los Alamos" but admitted that radiation releases "may become a familiar factor in the atomic age." Read about or order the book here, thanks.
Posted by Greg Mitchell at 9:20:00 AM