The Shameful Legacy of Bikini

Besides covering the sabotage of the MGM film by the Truman White House and military, my book coming on July 7 (pre-order now), The Beginning or the End, covers other key nuclear-related events of that crucial year of 1946. Among the most important: the beginning of the U.S. nuclear blasts in the Pacific. Here is an excerpt on evil plans for moving natives of Bikini to a far harsher new home.   They would never return home. 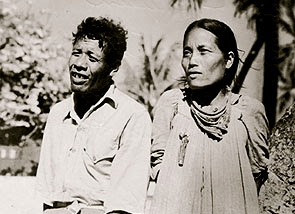 The U.S. had asked the 167 inhabitants of the Bikini atoll (made up of some 23 tiny islands) in Micronesia to "temporarily" relocate so that America could set up new and devastatingly powerful weapons for "the good of mankind and to end all world wars." The first test was planned for late spring or early summer. It called for a weapon exceeding 21 kilotons in force (where the Hiroshima blast was 15 kilotons) to be dropped over dozens of unoccupied junked ships in the Bikini lagoon to judge the effects on that fleet. The second test would be set off in the same area under water, beneath another ghost fleet, by remote control.

The Bikini islanders learned of their forced evacuation when Navy Commodore Ben Wyatt, military governor of the Marshall Islands, arrived to remind them of Biblical passages--they had long welcomed Protestant missionaries--comparing them to "the children of Israel whom the Lord saved from their enemy and led into the Promised Land."

The Bikinians were none too pleased with this notion, but their leader, King Juda (left in photo), finally agreed to the relocation request, announcing "We will go, believing that everything is in the hands of God." (Wyatt staged a re-enactment of this meeting for a newsreel but it required seven re-takes because King Juda failed to act enthusiastic enough.) Of the eleven heads of extended Bikini families, nine chose Rongerik, 125 miles to the east--about one-sixth the size of their current island--as their temporary home.

In reality, Wyatt and other U.S. officials knew that the islanders would never be allowed to return to what was certain to be a heavily-contaminated former paradise. Time magazine quoted a U.S. officer as boasting that easing the Bikinians out was "one hell of a good sales job." The magazine writer added: "Progress chuckled over a victory." Time observed that they took few possessions with them beyond their bibles, hymnals and furniture brought by missionaries, along with "latent syphilis left by Yankee whalers of the pre-atomic age."

No one lived on Rongerik, which was helpful, but the reason for that was not: It had few supplies of food and fresh water. The Navy knew of the challenges the Bikinians would face there, but still left them with only a few weeks of water and food.
Posted by Greg Mitchell at 2:36:00 PM