Another brief excerpt from The Beginning or the End,  coming on July 7 (please pre-order, see below), this time on Eleanor Roosevelt getting the actor playing her late husband--the legendary Lionel Barrymore--fired from the movie. He had seemed perfect, since he was now confined to a wheelchair....
**** 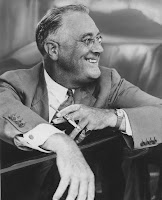 Eleanor, through her son James, who lived in Los Angeles and had once worked for producer Sam Goldwyn, informed MGM executive James K. McGuinness that the Roosevelt family would "prefer" another actor in that role. Barrymore had campaigned vigorously against FDR in a re-election race. MGM set up a screening for James and two other family members so they could view scenes already shot featuring Barrymore. At least one of the three remained opposed, but James believed that if Barrymore wrote a conciliatory letter to his mother that she would relent. 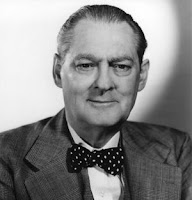 Barrymore agreed. He assured the former First Lady that, while his politics indeed did not match FDR's, he had never "defamed" him, while admitting, "I'm inclined toward salty language." The letter was deemed so important it was delivered personally to Eleanor in New York by Loew's Inc. chief, Nicholas Schenk, the ultimate power over MGM. This still did not move her.  James informed MGM that the family was not asking them to remove Barrymore—but "we'd be happier if you did." Barrymore was close to MGM's Louis B. Mayer, his fellow Republican, but MGM fired him anyway.
How did this colorful, behind-the-scenes drama emerge in the press? It arrived in a lengthy, syndicated Hearst column written article by none other than Bob Considine--who wrote the original script for The Beginning or the End.  Considine noted that Barrymore had now accepted the role of small town banker in It's a Wonderful Life, joking that this was quite a demotion from playing the President of the United States.
MORE on book and to order, here.
Posted by Greg Mitchell at 9:19:00 AM