When Truman Titled a Hollywood Movie

My new book The Beginning or the End tells the full story of how Harry Truman and the military sabotaged the first movie on the atomic bomb, from MGM, in 1946, turning a warning from scientists (sound familiar?) into pro-bomb propaganda. Here's a brief excerpt on how Truman's story with it started...
* 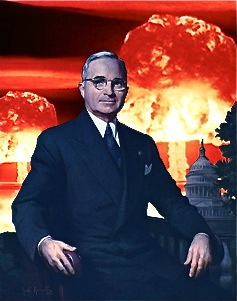 The MGM hustlers Sam Marx and Tony Owen (husband of Donna Reed) were a bit on edge, striding into the White House, but the casual Truman soon allayed their fears. The sit-down was supposed to last fifteen minutes; it stretched to fifty. Marx was impressed with Truman's affability as he filled holes in the atomic narrative the MGM producer had pieced together from others. Truman's manner reminded him of an unheralded tennis player who finally gets his big chance at Wimbledon and then plays way over his head. Truman's only failing was insisting on telling bad jokes.
Some of Truman's bomb-related anecdotes appeared tailor-made for a movie, however. There was that time, or example, when he was a U.S. Senator on a committee investigating government expenditures. This took him to the gates of Oak Ridge where millions of federal dollars were being poured into some kind of mysterious war project. When he was barred from entering the gates, he called FDR himself and demanded an answer. Roosevelt advised him to forget about this "very special place" for now. When Truman became his vice president, FDR still did not inform him about the bomb project, and died in April 1945 before scheduling that talk.
Marx had already started formulating a scenario for his movie, which he had not yet shared with the scientists but was happy to sketch for the president. It would cover every phase of the bomb's conception and development and eventual use against Japan. Truman responded enthusiastically, going so far as to verbally grant permission for the studio to proceed. As they were exiting, Truman stopped them at the door and asked if they had titled their movie yet, and was told no. "Make your film, gentlemen," he urged, "and tell the world that in handling the atomic bomb we are either at the beginning...or the end." "Mr. President," Marx replied, "you have just chosen the title of our film." More on the book here.
Posted by Greg Mitchell at 9:51:00 AM